A BC Interruption Festivus Celebration!

It's holiday season around the blog.

Share All sharing options for: A BC Interruption Festivus Celebration!

Before the Christmas holiday, there is another holiday, Festivus, based on the 90's comedy Seinfeld. If you have lived in a box the past twenty years and don't know what this holiday is , let me recap. There are four major tenants of a Festivus celebration

1. The Festivus Pole. Unadorned of course.
2. Festivus Dinner
3. The Airing of Grievances- Basically airing out anyone who got on your nerve the past year.
4. Feats of Strength.

Here at BC Interruption we want to be inclusive to all people, so for those of you that want to celebrate a BC Inspired Festivus, here is how we would do it.

Take an 9 foot high steel pole and shove it in a Christmas tree stand. To make this more Boston College-ish, you really need to emphasize that it needs to be undecorated. So to do that, while still keeping it BC, tape on your favorite picture of Conte Morgue during a BC basketball game. May I suggest? 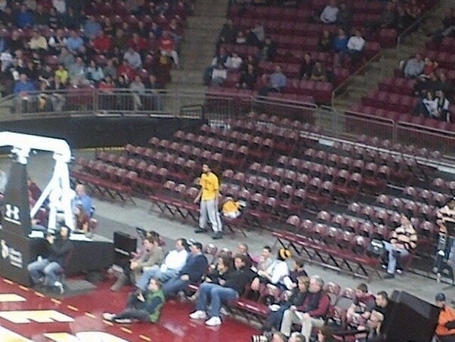 For this you will need to head on down to the Lower Commons, during the two hour window that they are open after Finals are done. Nothing takes like frustration and anger like a solid "make your own Steak sub" in lower, so make sure you grab a handful of those. Also, make sure to head over to the Pasta section to get your "Pasta with Ragu out of a can sauce", that'll help with the depression after the next two sections.

Oh yes, you are going to need a beverage to wash down this artery clogging delight. Head on over to Reservoir Liquors and buy a 12 pack of Busch Light, because if you are going to do it the BC way, you have to do it right.

Finally head across the street and grab an economy pack of Advil, after drinking all that Busch Light you are going to want to be prepared for the skull splitting hang over the next morning.

Grab your fellow BC fans, and family, and after downing a few Busch Lights which should loosen your filter, start your airing of grievances. If the people are not around, you have this new joyous invention called the internet that makes all of these people come right to your fingertips.  Here are some possible ones (don't say I never gave you anything).

1. Jerry York, that game against Union in the NCAA's last year? WHAT THE HECK WAS THAT??!!!!
2. Hey Heisman & Hobey Baker selection committees, WRONG.
3. Jerks that behind me at football games, NO I WILL NOT SIT DOWN.
4. Brad Bates: HOW HARD IS IT TO GET SINGLE GAME TAILGATING SPOTS?
5. IVE EMAILED/TWEETED/SAT IN FRONT OF YOUR HOUSE TO TALK TO YOU ABOUT THE STRAT PLAN AND RETRACTABLE DOME, WHY HAVEN'T YOU RESPONDED AND WHERE IS MY DOME????
6. AJ, Baldwin Junior? NOT FUNNY!
7. Grant & Joe, could you possibly write a hockey write up that isn't the same length as War & Peace?
8. Brian & AJ, could you possibly make it through one week without getting into a flame war with your readership?
9. Steve Donahue!!!!!! sigh.
10. Conrad, you have not invited the rest of the writers to the Mods. NOT EVEN ONCE!!

If you follow these four simple steps you will have a very BC Interruption Festivus, and make the Costanza Family Proud. Happy Festivus to the rest of us!

Be sure to Air Your Grievances in the comment section.