In this week's special edition we look at the poll and what each team is thankful for.

Happy Thanksgiving folks, we have yet another installment of our weekly power poll here. Instead of my usual analysis of the upcoming game, we are going to switch up our style here and Thanksgiving-ize the poll this week. Enjoy!

What FSU is thankful for: Will Muschamp

I am not going to go and take a cheap shot here at Jameis Winston, lots of allegations and what not but he hasn't been formally charged with anything. But if there is one thing in college football that appears to be a bigger circus than Jaboo it's what's going on in Gainesville. Florida lost to Georgia Southern last week, an FCS team that had 19 scholarship athletes out and the Gators still lost. The Gator faithful are gnashing their teeth, and sharpening their gator crested knives, and Muschamp is the target of all their anger. FSU has got to be thankful that UF is a giant disaster right now and not on their game.

What is Clemson Thankful For? The BCS Clusterbleep

The Tigers have a tough matchup going this weekend, but thankfully their trip to a BCS game was mostly assured when a ton of one loss teams lost last week.

What Duke is thankful for: David Cutcliffe.

BC fans, we need to get our maroon and gold pompoms out of our ears, Cutcliffe is the Coach of the Year and deserves it with what he has done with this team. They are smart, disciplined, play defense, and are going to still lose to UNC on Saturday.

What UNC is thankful for: The Month of November

The Tar Heels started the season off with a bunch of losses, and many of us thought they were toast. WRONG. Look at the month of November, including the 80 points they put on Old Dominion on Saturday. This is a good team folks, and I think they may play spoiler to Duke on Saturday.

What Georgia Tech is thankful for: The UGA injury bug

Remember at the beginning of the season many experts had the Bulldogs as a national contender. Then in some sort of cruel twist of fate, they proceeded to lose their two top wide receivers, a regular running back, and most recently Aaron Murray who blew out his ACL last weekend. Those are just the injuries I can think of off the top of my head too, I'm sure there is more. The neutered UGA offense (*rimshot) will be much more manageable for GT, but still picking the Dawg's in this one.

What is BC thankful for?

What is The U thankful for: No more "weak attendance" image jokes
We are all sad, but we are done with these pictures for the season: 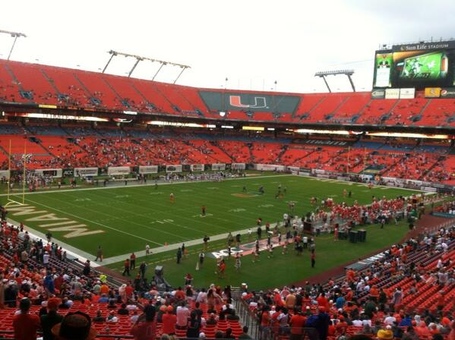 What is VT thankful for? Bud Foster

Week in and week out the Hokies have put together a pretty bland offense, one that is also pretty inept at scoring points. However, Foster's defense has been spectacular as always.

What is Pittsburgh thankful for? Not having to be in The Big East AAC anymore.

What is Syracuse thankful for? Diamond Ferri jokes

Yes we get it, he torched us and destroyed our best chance at making a BCS bowl. But that was ten years ago. Now you are going to get retribution on Saturday when the Big Engine That Can destroys your hopes of going bowling at all.

What is Maryland thankful for? The NC State Wolfpack

As much as I would have loved Maryland to end their ACC affiliation with that joyous loss last weekend, it is not to be. We can however rest on the fact that it was the Terps final home game in the conference. However, their final game of the regular season is against the Wolfpack, who last time I checked is terrible at football. Damn it guys, BEAT MARYLAND.

What is Wake Forest thankful for? N.C. State Wolfpack

What is N.C. State is thankful for? Mike Glennon and Russell Wilson

Hey look they have something football related to cheer for! Neat.

What is Virginia thankful for? The 2014 Recruiting Class

Hey guys did you know that the Hoos have one of the best recruiting classes in the country including two five stars? That's pretty impressive for a team that has no coach, and hasn't done much of anything in recent memory.