Duke? Really, the Blue Devils are good at football? Since when?

Things are settling down in the power poll this week. Most of the ACC stayed relatively consistent this week, but the big winner was the Duke Blue Devils who jumped to #3 in the polls after a big win over the Canes. Here is how the poll broke down.

Prediction: Florida State 63 Idaho 3. My prediction of a Seminole beat down of the Orange last week was pretty damn close (only off by 3 on both sides), and I expect nothing less out of FSU this weekend as they tune up for a BCS Championship game in 6 weeks. The only reason I don't have FSU scoring higher is that I think Fisher will yank his starters relatively quick after he hits 50 in the second quarter.

Prediction: Clemson 63 Citadel 6. The Tigers looked like barn burners again with a butt whooping of the Yellow Jackets last weekend. Now they get to play Citadel, and dear god it's going to be brutal.

Prediction: Duke 35 Wake Forest 13. Raise your hand if you thought at the beginning of the season that Duke had a legitimate chance to win the Coastal Conference? Your hand is raised? You can put it down now liar. The Blue Devils took care of Miami last weekend, in a prediction that I called (humblebrag). Bravo to David Cutcliffe, who if it wasn't for Gus Malzahn would be an easy candidate for coach of the year. Luckily for all of us their basketball team is bad...wait they're not? Crap.

Prediction: Miami 38 UVA 21. I'm just going to go ahead and leave this here. 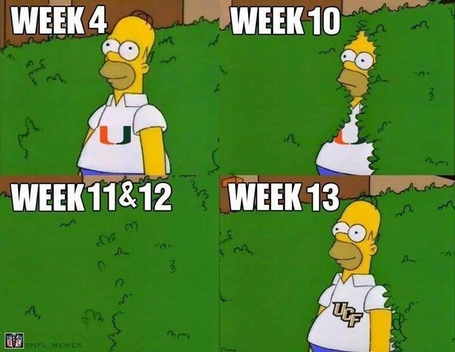 Prediction: UNC 40 Old Dominion 24. Our exalted leader Brian was right when he said that UNC was a lot better than their schedule reflected when they faced BC in October. And over the past month and a half they have shown just that, and will be bowl eligible with their fifth straight win this weekend.

Prediction: Georgia Tech 49 Alabama A&M 10. Tech was put in their place last weekend against Clemson. This weekend they get to play a team that I didn't know existed until I wrote this column.

Prediction: They lost to Maryland and BC this year yet someone out there still had them ranked 5th while putting the Eagles 10th. Identify yourself so that we may mock you.

Prediction: Boston College 31 Maryland 27. Oh nothing makes me happier than beating up a Randy Edsall team. He never was able to crack the Spaz code, let's see if he can figure out the dudes and a steady helping of Andre Williams.

Prediction: Pittsburgh 24 Syracuse 21. In this ACC fartfest, the conference NOOBS face off in a battle to see who wants to go bowling and who wants to be forced to win in their season finale. I really really want to Pitt win, just because it will be such a great moment in the BC/Cuse rivalry if we can deny the Orange a bowl bid on the final day of the season. Come on Pitt make this happen.

Prediction: Pittsburgh 24 Syracuse 21. Help us Pittsburgh you are our only hope.

Prediction: Boston College 31 Maryland 27. ESPN showed Randy Edsall jumping for joy when his team became bowl eligible last weekend, and congratulations to the Terps on that. That is quite the accomplishment. Forget the fact that you were a Top 25 team for part of the season and then fell apart, making a bowl is a real feat. Just hope you don't forget how special that is when man-beast Andre Williams trucks your defense for four quarters on Saturday.

Prediction: Duke 35 Wake Forest 13. I have nothing left to say about Wake Forest, they need to win on Saturday to be bowl eligible and I just don't see that happening.

Prediction: ECU 42 N.C. State 10.  The Wolfpack are a bad football team as we all saw last weekend, ECU will show that again on Saturday.