A look at this week's matchup, Wachusetts Green Monsta IPA, Big Pun, and another prediction by Baldwin Junior.

Last week's beatdown at the hands of the UNC Tar Heels is in the rear view, and hopefully the team and coaching staff have learned a thing or two to help prevent a repeat performance this week against Virginia Tech. Steve Addazio and company must have been very busy this week as the Hokies bring in one of the nations premier defenses to the Heights. Let's take a look at some of the final thoughts and predictions for this weekend's game.

With the injury to Spiffy Evans, who steps in as the number two wide receiver? Or given this corps struggles does it even matter? Can Chase Rettig get rid of the ball faster please?  And while he's at it, can he try to throw the ball to someone other than Alex Amidon? How long of a leash will Steve Addazio give Rettig if the senior continues to really struggle? How many "oh my god" physical runs will Andre Williams have this weekend against a good VT defense? Can the Eagles offense figure out a way to get Myles Willis back into the game plan?  Can BC's defense get to Logan Thomas? Each week someone on defense steps up, in past weeks it's been Kasim Edebali and Kaleb Ramsey, who will have the big week against Virginia Tech? Can Steven Daniels continue to improve and become a reliable linebacker? Can anyone in the secondary make a big play?

Will Boston College go back to their bread and butter play action pass, or will they continue to try the five wide spread? Given the offenses struggle last weekend, does Ryan Day have a new wrinkle in store to help the offense move? Can Don Brown's defense get off the field on third downs? Will we get to see an example of Beamer Ball tomorrow? Will either team crack 20 points this weekend? How will attendance be effected by the Boston Red Sox Rolling Rally Parade? Can BC get through a game without another WTF two minute drill? 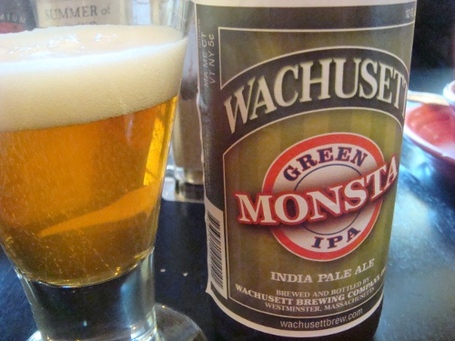 Before you all crucify me over this choice let me give you a few reasons why I chose it. First off, this is my post and I am a diehard Red Sox fan, and I know at least three other writers on the site are as well. The name, while very hokey is still a great choice, and is probably one of the best beers you can get inside of Fenway Park (for $9).  Here is why I chose this beer. Even as a Sox fan, who wants to go to the Rolling Rally on Saturday, the thought of skipping BC tailgating and the game never crossed my mind. I thought of wearing some Red Sox gear to the game as a way of honoring the players while still attending the game, but most people on Twitter thought it was a stupid idea. So I figured, how about drinking a Red Sox inspired beer at a BC tailgate. Bingo. I am on an IPA kick too as well so this just made sense. And for you non Sox fans, tough. Eat it Brian.

CAW CAW! BAWDWIN JUNYOR HERE AGAIN FORE ANOTHER PREDILICTION AND FUN TIME! THIS WEEK HAS BEEN ESPECIALLY FUNS FOR ME. YESTERDAY I GOTS TO GO TO A BEECEE PRACTICE AND WATCH THE DOOODS! MY FAVORITEST PART WAS CHASED RETTING'S QUARTERED BACK DRILLS. IT WAS SOOOOO INTENSE! FIRST CHASED WENTS BACK TO PASS. THEN BAWDWIN JUNYOR WENT AND BOUGHT A PRETZEL, AND THEN A SMOOSHY HOT SANDWICH FROM HILLSIDE, THEN BAWDWIN JUNYOR CHECKED HIS EMAILS IN THE LIBERRY (CAWCAWBOUNCYFUN@GMAIL.COM) AND WHEN I GOT BACK CHASED FINALLY MADE HIS FIRST PASS! I WAS SO PROUDS OF HIM!

AFTER THE PRACTICE, ALL THE PLAYERS GOT INTO THEIR HALLOWEEN COSTUMES! ANDRE WILLIAMS DRESSED AS THE HULK, ALEX AMIDON DRESSED LIKE SPICOLI (I HADS TO ASK, BAWDWIN JUNYOR DOESNT WATCH THE TEEVEE), AND ALL THE WIDE RECEIVERS AND TIGHT ENDS MUST HAVE NOT COMMUNICATED BECAUSE THEY ALL DRESSED LIKE THE INVISIBLE MAN! THEY ARE SO CREATIVE!

THIS WEEKEND THE TURKEYS OF VIRGINNY TECHNICAL HIGH SCHOOL COME TO THE BEECEE. I HAS A SECRET PLANS TO BEAT THEM. I HEARDS THEIR DEFENDING COORDINATOR BUDDY FOSTER BRINGS A LUNCH PAIL AND LEAVES IT ON THE SIDELINES. WELL, DURING HALFTIME BAWDWIN JUNYOR IS GOING TO SNEAK BY AND EAT THEIR SANDWICH AND GIVE THE CHIPS TO THE BAND. IT WILL BLOW THEIR MINDS! BEECEE WINS 24-0! CAW CAW

I have to say that Big Punisher is one of the most underrated lyricists of all time and this song has got to be one of the finest examples of how great he was. Listen to the last line of his first verse if you don't believe me, it's still don't believe me, it is one of the sickest lines I have ever heard in a song. If you don't know who Big Pun was, he was a morbidly obese rapper that came out of New York in the late 90's. He had a great flow, and some awesome songs (if you listen to any rap you might be aware of Still Not A Player), but his health got the better of him. Weighing at over 600 pounds, Pun would rap at concerts with a tank of oxygen because he was so overweight he needed help breathing between verses. He died in 2000 from a weight related heart condition. I picked this song, and Big Pun in general not only because he was a great emcee, but because when I'm bored in my car I always wondered what he would have been like as a BC nose tackle. Probably not good, given that he couldn't breathe, but it sometimes crosses my mind. Weird I know.

Only thing about Big Pun is that he's a bit on the violent side. Luckily, this video is edited because just like Wu Tang, BC Interruption is for the kids.

Two of our editors got the UNC picks right (Dan & Joe), while the rest of us weren't even close. Conrad continues to be missing in the Mods, while Jeff appears ready to make his move up the standings. Again with another split in picks, this could be an interesting week in terms of predictions.

Heading to the game this weekend or spending the time at the Rolling Rally?  Partying with friends before the game? Want a picture of your tailgate or group of friends featured on next week's Final Thoughts? Make sure to put up your photos on Facebook, or if you want you can email them directly to me at bchysteria at gmail dot com. Please make sure you understand that by emailing them to us you are giving us the right to use your picture on our posts!

Are you ready for this weekend's matchup with the Hokies? Can the Eagles beat the offensively challenged Hokies? What are your thoughts on the game? Leave them in the comments!