A mid-week dose of schadenfreude to get you ready for this weekend's BC-Minnesota hockey series.

Welcome to the first chapter of BCI's newest series, "Great Moments in ________ Failure" - a mid-week dose of schadenfreude to get you ready for the upcoming weekend's hockey series. We will have many hockey features which will focus on accentuating the positives of opposing hockey teams, and expressing our love for some of our favorite road trip spots... this will not be one of those features.

Now, it may seem strange to start the "Great Moments in Failure" series with the Minnesota Golden Gophers. After all, the Gophers are one of the best programs in college hockey history, they have great colors, and we share common red-and-white foes in BU and Wisconsin.

But really, Minnesota is a perfect place to start this series, for two main reasons:

1) I've found Gopher fans to be notoriously easy to wind up. You can tell them a basic, obvious, easily verifiable FACT, like that their vaunted women's hockey team would have a MUCH harder time running roughshod all year if they had to play powerhouses like Maine, Vermont and UConn regularly, and they act like there's no possible way that could be true, and get very upset about it, even though it's obviously true; and

2) Minnesota hockey fans are just starting to sound a wee bit like Notre Dame football fans. Chortle at them for seeming to get knocked out by an Eastern school every year in the tournament? Prepare for a lecture about how back when men were men and they wore leather helmets, nobody could touch the Golden Gophers, and besides everyone else cheats because they don't have rosters 100% comprised of Minnesotans (unless it's convenient to them to have a non-Minnesotan; see, Kessel, Phil).

Why yes, back in the long-gone days of 2002 and 2003, when fans would gather around transistor radios or wait for the dog sleds to pull in news reports of the Gophers' faraway exploits, they were the best. And have you ever heard of a man named Herb Brooks? Not only did he invent the Miracle on Ice, he also was in Independence Hall in 1776 to help craft the Declaration of Independence.

So why can't they get it done this decade? Well, it's not fair. Because if the rules were the same as they were in the good old days - every player has to be from Minnesota, Minnesota never has to play any away games, and Minnesota gets to hand-pick which four teams play in the tournament, which will be played in Minnesota - they would win all the time.

So without further ado, here you have it: 12 great moments in Minnesota Failure.

#12: #1 seed Minnesota gets knocked out of the 2007 NCAA tournament by rival North Dakota.

The Minnesota Golden Gophers went into the 2007 NCAA tournament as the #1 overall seed, and had all the hype and all of the headlines... only to get knocked out by their rivals. This will become a recurring theme.

#11: Minnesota and 8-foot-4 Superman Blake Wheeler Crushed by BC and 3-foot-7 Nate Gerbe in First Round of the 2008 NCAA Tournament

#10: 2011 Gophers Swept On Home Ice by Alaska-Anchorage Seawolves in First Round of WCHA Tournament 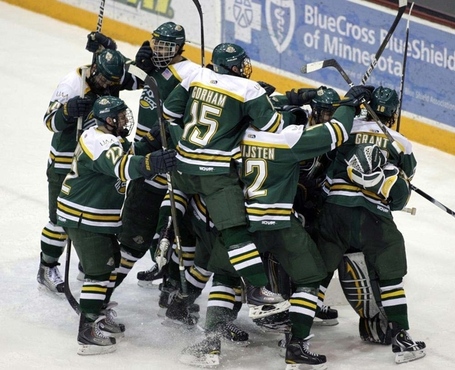 Understand this about the dearly-departed WCHA Final Five, formerly held annually in St. Paul, MN: it was designed to be a set of Gopher home games. Much to the chagrin of their WCHA foes, no matter what seed Minnesota was in the tournament, they would always come to their second home in front of a home crowd in the Final Five. Well, except in 2011, when they couldn't even manage to beat Alaska-Anchorage at home to advance to said Final Five. This sweep at the hands of the Seawolves ensured the end of their season and much laughter across the upper midwest.

#9: The Annual Minnesota Hissy-Fit When the NCAA Brackets Are Announced

To be fair, this hissyfit was a characteristic of all of the old WCHA powers, not just Minnesota. I wonder if it will be the B1G or the NCHC that carries the whining throne this year. We shall see.

#8: Minnesota Eliminated by Yale in First Round of 2013 NCAA Tournament

Stop me if you've heard this one before: #1-ranked, almighty Minnesota, everyone's prediction to go to the Frozen Four and win the whole thing, loses in the first round to an Eastern team. Granted, it's hard to expect the WCHA to compete against the hockey overlords of the ECAC. But still.

Here's Minnesota's "super star," "best goalie in the world," "Olympian," "NCAA champion," "legendary," "undefeated" goalie Noora "Boomtown" Raty giving up the juiciest of all juicy rebounds to let down her self, her team, and her country and let Boston College tie the game late in the Frozen Four on Minnesota's own home ice. The rest, as they say, was history.

#6: North Stars Move to Dallas Because Not Enough People in Minnesota Care About Hockey 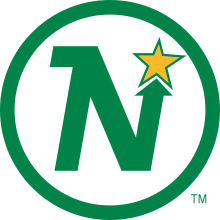 Minnesota may like to call itself the "State of Hockey," but they are only one behind Georgia in the all-time standings of "having your NHL team move away because your state isn't capable of supporting it." Sad, really.

#5: Gophers Totally Collapse at End of Second Period Against BC in 2012 Frozen Four, Allow Two Goals in Final Minutes

Could these goals have been any easier for BC? They were almost as easy as that game in its entirety, in which BC completely bulldozed the Gophers on the national stage, 6-1, in the NCAA Semifinal.

Gophers defeated by Holy Cross at The Ralph (via RedFrogND)

You knew this was coming, right? #4 seed Holy Cross... the #16th and final entry in the NCAA tournament... only there because of the AHA's autobid... beats Minnesota in overtime on national television. And, to boot, the game took place in North Dakota's home rink. Imagine watching BU lose to Western Ontario or Dalhousie or whatever in Conte Forum in a tournament game. It was kind of like that. Ouch. 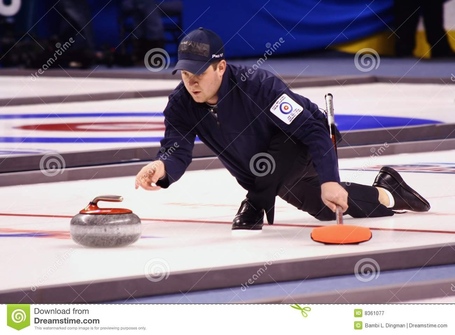 Noted Minnesotan John Shuster shows America what Minnesotans do on ice in a big stage, missing some crucial final rocks in consecutive round-robin games to prevent the US from advancing to the Medal Round of the Olympic curling tournament. The US's 2-7 run at the Olympics included losses to Germany, Norway, Switzerland, Denmark, and Great Britain. Notice anything in common there? Yep, all of those opponents are from East of Minnesota.

Because when you're not capable of scoring against BC, you might as well score for BC, amirite?

Come on now, you didn't seriously think this was just the #4 moment, right?