A big ACC matchup this weekend in Death Valley, will BC roll over, or can they shock the heavily favored Tigers?

Share All sharing options for: Boston College vs. Clemson: Final Thoughts and Predictions

Last week was pretty fun right? BC took advantage of a porous Army defense and just ran the ball down their throat for four quarters, and put a ton of points on the way to a solid Eagle victory. Just the way it should have been last year, but Sans Spaz. Well put those fun memories in the rear view mirror because there is quite the difference between Army and Clemson. Comparing Army and Clemson is like comparing Kate Upton and Sarah Silverman. One team is well put together, with very few flaws, while the other is kind of meh, gets by every once in a while but overall is can't hold a candle on the field. (note this has nothing to do with Army soldiers, just the football team) This weekend we need to prepare ourselves for Kate Upton. Here we go!

How will Andre Williams look against a Clemson defense that has given up quite a few long runs? Who the heck is going to cover Sammy Watkins? Will Chase Rettig make more than 25 passes in this game? Which Boston College offensive line will we see, the one that held it's own against FSU or the one that got dominated against USC? Who is going to cover Sammy Watkins? Will Spiffy Evans be able to build on the success he had against Army? Will Steven Daniels continue to improve as the year progresses? No seriously, who on this team will be able to cover Sammy Watkins? How will health effect Kaleb Ramsey's ability to play this weekend? Will Myles Willis or Spiffy Evans be able to make another big play on special teams?

Does the Boston College defense stand even the remotest chance of stopping the Clemson defense? Can we expect BC's defense to slow the Tigers at first and then run out of steam? If Clemson jumps out to an early lead will the Eagles be able to rally back or will they roll over and play dead? What kind of offensive scheme does Ryan Day have set up for this weekend's game? If BC wins will Brian/Jeff/Conrad streak the field?

What To Drink Down In the Shadow Of Death Valley 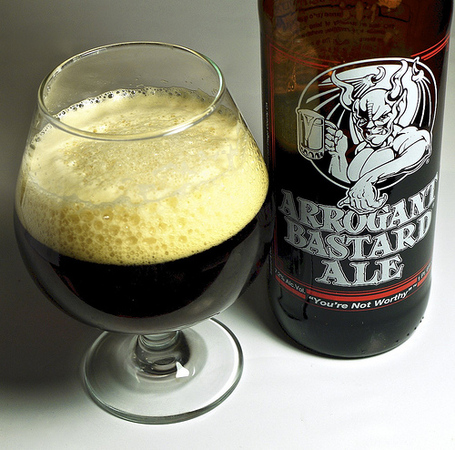 Arrogant Bastard Ale: I picked this beer for a myriad of reasons. First and foremost it's an amazing darker ale that mostly comes in a liter bottle, which of course means HELLO HIGH ALCOHOL CONTENT. Secondly, the beer name goes not as a dig to Clemson fans (who are some of my favorite in the ACC), but my hopes of what is going on in Dabo Swinney's head this weekend. With a game against FSU looming in their future, I pray that Swinney is saying to himself "Oh we've got this, after all it's only BC". The beer even has the tagline "You're not worthy" on it, which I imagine is how Swinney feels about BC coming down to play in Death Valley. Hey, he probably is too good of a coach to be thinking this, but a brother can hope can't he?

Suggestions from the other BCI Editors: Get lots of beer ready, you may need it!

CAW CAW HERE WE GOES AGAIN WITH THIS WEEK'S INSTALLATION OF THE BAWDWIN JUNYOR PREVIEW OF THE BEECEE FOOTBALL! TODAYS I REPORTS TO YOU FROM THE TOPS OF AN RRRRVEEE WHERES A GROUP OF BEE CEE SENORS HAVE BEEN SO AWESOME THAT THEY HAVE VOLUNTEERED TO TAKE ME TO THE KLEMSUN! ORIGINALLY BRADLEY WAS GOING TO LEAF ME AT HOME WITH THAT CRAZZEE LIVE EAGLE, BUT THESE KIDS SAID TO ME "BAWDWIN JUNYOR, YOU ARE MORE IMPORTANT TO BC THAN ANYONE ELSE, WE READS YOUR PREVIEWS EVERYWEEK, AND WE LEARNS MORE FROM YOU THAN BRAIN, AJAY, GRUNT, AND JOJO COMBINED! AND FORGET ABOUT DANNNY BOY, YOU ARE SOO MUCH MORE SMARTER THAN HIM!!" AND WOULDN'T YOU KNOWS IT. BEFORE YOU CAN SAY WE IZ BC I WAS ON TOP OF AN RVEE! I HOPES THEY DON'T ASKS ME TO SHOTYGUN A BEER, I GETS VERY SLOPPY WHEN I DRINKS!".

IN THIS WEEKENDS GAME, WE TAKE ON THE KLEMSUN. I FIGURES THAT COACH ADDAZIO WILL TACKLE TWIG BOY DABO DABO BEFORES THE GAME AND CLUTCH HIM INTO SUBMISSION. AFTER DABO DABO CRIES, HE WILL CONCEDE THE GAME AND BAWSTAN COLLEDGE WILL WIN 38-35 IN OVERTIME. CAW CAW!!!

Gametime Song of the Week -Wyclef Jean- Anything Can Happen

You know what makes me feel old? Is that this album came out in 1997 and is now considered "old school". It's over 15 years old now, and I can remember buying the CD from the Columbia Music Service after I got my 11 CD's free or whatever the deal was. Wyclef was pretty awesome during his days with the Fugees (The Score is one of the greatest albums of the 1990's and I'll fight anyone who disagrees), and then gradually his music deteriorated after the group dissolved after Lauren Hill got a bad case of the crazies. Well Wyclef went on to make that song Perfect Gentlemen a song about strippers, which if you were in college in the 2000's you probably heard about half a billion times. I believe the latest news I've heard about Mr. Jean is that he was running for President of Haiti. No seriously, he was.

But I digress, this song is a perfect fit for this weekend's game. BC is projected to lose, and most people, myself included don't think it will be very close. But as Wyclef says in this song like three thousand times "say what say what, hey yo anything is possible".

The big winners after last weekend were Yours Truly and Jeff who both were within 24 points of the correct score. Grant and Brian were pretty far off, but that didn't matter to the Exalted Leader who continues to lead the Prediction Game after 5 games. A tip of the hat goes to Joe, Dan, Grant and Brian who all had predictions that were further off than Baldwin Junior. That takes some talent.

Heading down to Clemson for the weekend? Partying with friends before the game? Want a picture of your tailgate or group of friends featured on next week's Final Thoughts? Make sure to put up your photos on Facebook, or if you want you can email them directly to me at bchysteria at gmail dot com. Please make sure you understand that by emailing them to us you are giving us the right to use your picture on our posts!

Are you feeling a historic upset in Death Valley? Or do you think that BC just doesn't have enough bullets in the chamber? What are your thoughts on the game? Leave them in the comments!