The Boston College Eagles went into this game looking for an upset. Instead, they came out with a flurry but failed to respond once UNC got it going. In the end, they dropped another ACC game, 82-70.

Boy, oh boy. There's a lot to say about this game, but I'll try to keep this relatively brief. The Boston College Eagles came out fired up. Conte Forum was relatively packed (even if there were a lot of UNC fans in attendance) and the team was ready to go. They jumped out of the gate and hit some shots early. And then P.J. Hairston went bananas and the lead disappeared. The Eagles were slow in getting back in transition and for some reason thought they could give Hairston any air space at all. You can't. He's got a beautiful shooting stroke and is way too long for any of BC's players to reasonably bother his release. Hairston scored 14 points in the first 12 minutes of the game before leaving with an incredibly scary head injury.

Once North Carolina opened up a modest lead, they never let go of it. BC kept clawing away and trying to make a run but could never put a serious dent in the deficit. Anytime the Eagles went on a run, UNC methodically responded with a key bucket. In the end, BC walked away with a predictable, but still disappointing 12-point loss, 82-70.

Olivier Hanlan is very very good. He seemed to be the only BC guard able to penetrate the defense tonight and is the only guy who never really gets down or shows poor body language. He plays his ass off until the final buzzer and has a general toughness that a lot of his teammates would be wise to replicate. His jumper is still iffy, but he attacks relentlessly and gets to the line with ease. At times, I feel as though he's almost too unselfish and simply needs to take over. Too many times he sliced through the defense and then kicked it out to a wide open Eddie Odio or Lonnie Jackson who would then proceed to brick the three-pointer or not take the shot at all. Olivier Hanlan is the only player on this team that I really get excited to watch every game.

The student section deserves some credit. It was full-ish and pretty vocal. They even stayed until the final minute. The signs and wigs and such were entertaining and it almost felt like a real college arena for once. The huge number of UNC fans kind of neutralized the home court advantage, but there was some real excitement in the air for once. That was cool to experience. My favorite sign was "I Like Basketball" -- short, succinct, and to the point. That particular Superfan held his "I Like Basketball" sign until the final buzzer, despite our team's best efforts to make him dislike basketball. 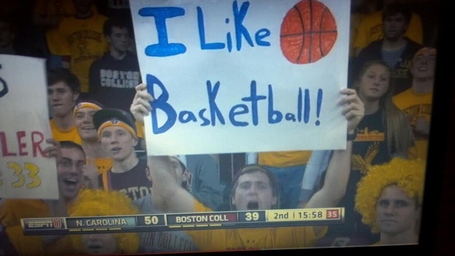 Eddie Odio continues to provide nice energy in short bursts. His athleticism is much-needed and he seems to be embracing the physicality and intensity on the defensive end of the floor. Steve Donahue openly acknowledged that this is not a good defensive team and it's something that he needs to work on. Also: Odio might be a vampire.

Eddie Odio is a vampire. No other explanation.

There are consistent breakdowns on both the individual and the team levels and that's something that is going to take time and maturation to fix. The team needs vocal leaders to emerge on the floor. I don't think Odio is that kind of guy, but his intensity should rub off on some of his teammates (specifically Ryan Anderson, please). Odio also has a sweet name to yodel after nice plays and he had a filthy put-back dunk tonight.

Ryan Anderson and Joe Rahon were, how you say, bad. Neither of them could establish any sort of rhythm and seemed to shy away from contact. Anderson commented in the press conference that he knew that UNC would be playing at a fast pace, but noted that they didn't respond to their physicality. I would agree with that. Rahon did a poor job penetrating the defense and creating offense. The offensive flow was lacking. Anderson was unable to get decent post position and seemed to fadeaway on every attempt instead of taking it strong to the hoop.

The guards were way too fast to give up their dribble. When they picked up the dribble and stand on the perimeter, it means that they have to wait for a big man to jump out and come get the ball. UNC has some big, long athletes and it makes sense that Lonnie Jackson and Rahon would be less confident in their ball-handling. But it clearly had a big impact on how BC ran their offense. If BC is going to have consistent offensive flow, they need confident and strong performance from at least 2 out of the 3 guards every game. Hanlan was great, but when both Jackson and Rahon are off, it's difficult to win.

Go home, ACC refs. You're drunj RT @dshookcsl: That is unfreakingbelievable...it clearly hit the rim. What a joke.

The officiating was...a;dga;fgjabsdgs. So inconsistent and so incompetent. There were bad calls both ways, but BC definitely got the short end of the stick. It's not the reason that the Eagles lost this game, but it certainly didn't help. I particularly loved when one ref called the foul, but waited for the other ref to decide whether or not it was a block or a charge. It added drama and suspense. Because let's admit it, we're all really just there to watch the refs, right?

Side note: why is the college basketball shot clock so damn long? It makes no sense. When BC was trying to get a stop and cut the lead down from 10 points with about 4 minutes left, UNC just dribbled and dribbled for days and days. UNC would burn 30 seconds off the clock, put up a crappy shot, and then get the offensive rebound. It was absolutely brutal and prevented the Eagles for getting any sort of comeback at the end of the game. Honestly, Donahue should have fouled during the stretch and just put the Tar Heels on the line. Hindsight, but still.

Dennis Clifford was unable to play more than 4 minutes because of his knee injury. Donahue was honestly upset in the press conference that Clifford couldn't go. It's apparent that Clifford has been dealing with this knee injury all year and it has to be super frustrating. The team had high hopes for Dennis this season and it's just been completely derailed by injuries. That sucks. As far as the team goes, it means that the Eagles are down their only real 7-footer. Andrew Van Nest is smart and finally get healthy, but he was just overwhelmed by UNC tonight. James Michael McAdoo had a billion offensive rebounds and Van Nest airballed a layup from roughly 1 foot away. It was ugly, hence this section.

Eddie Odio missed a three-pointer by roughly 7 feet. It was awful. Ryan Anderson air-balled a free throw. It was also awful.

I don't know what Patrick Heckmann is doing, but it doesn't seem like he has any real goal when he gets the ball. He refuses to take open three-pointers and when he puts the ball on the floor, he has no purpose. I was stunned to look at the box score and see that Heckmann only have one turnover. I could have sworn he turned the ball over like seven times.

P.J. Hairston's injury was super ugly. He took a hard hit from his own teammate on a play and seemed to get some whiplash as he went to the ground. He was taken off on a stretcher and seemed alright later as he was walking around after the game. He tweeted that he was okay. But this was legitimately scary.

Thanks to everyone for the support, I'm okay just a very very bad headache....

The BC Eagles stay at home and will try to get a win when they host the Clemson Tigers this Saturday at noon. Noon! On a Saturday! I expect roughly 6 hungover students to be there. That game will be on ESPN3.