With Pittsburgh and Syracuse set to join the conference next season, the ACC was already anticipating a move to a five-day format for the ACC men's basketball tournament. Though Notre Dame makes it 15 programs, an odd number, don't expect the new format of the conference tournament to change much.

Commissioner John Swofford thinks that this new format will remain largely the same after Notre Dame joins, with three games being played on Wednesday and the top-four seeds continuing to receive early-round byes. The dreaded double-bye? Oh yes, the double-bye.

Heights Sports put together a sample bracket for your viewing pleasure: 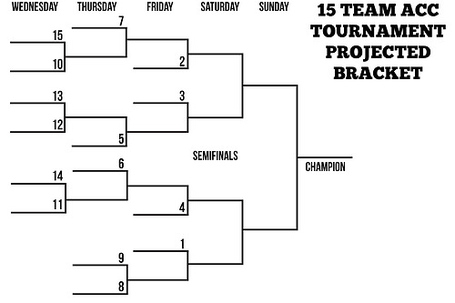 Here's an even better idea: why don't we qualify the top 12 programs for the tournament and leave the format as-is?