Boston College Football Fall Camp: Can A Two Running Back System Work In 2012?

Share All sharing options for: Boston College Football Fall Camp: Can A Two Running Back System Work In 2012?

As Boston College's fall camp opens, one of the position battles to watch is at running back where the Eagles return a trio of talented tailbacks in Rolandan Finch, Andre Wiliams and Tahj Kimble. It was Finch who lead the team in carries (157) and yards (705) last season, but Williams also got a decent share of the workload (124 attempts, 517 yards). While Finch and Williams' stats were comparable, you'll recall that BC rarely went with featuring more than one back in a game.

A reliance on a feature back has been a pattern for the Eagles offenses over the last three seasons under Spaz. Last season, Andre Williams, in relief of starter Montel Harris, got the bulk of the carriers for the Eagles first three games against Northwestern, Central Florida and Duke. Harris came back for the UMass game, where the workload was evenly distributed between Williams, Finch, Harris and Kimble, before taking the majority of carries in his first start back from injury against Wake Forest.

After Harris went down in the Wake game, the Eagles leaned on Finch to carry the team in the Clemson, Virginia Tech, Maryland and Florida State games. After two costly fumbles in the loss to Florida State, Finch was pulled in favor of Andre Williams. Finally, in the last two games of the year at Notre Dame and Miami, the offense settled on Williams, Kimble and Finch splitting the workload three ways. 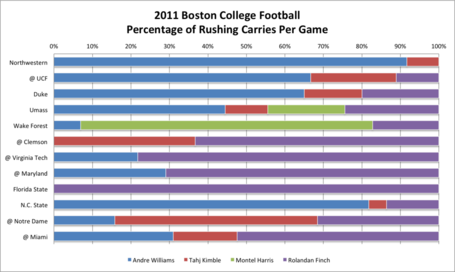 In 2011, the ball wasn't all that well distributed on a per-game basis, but this distribution was better than over the previous two seasons which were more or less the Montel show. Here's the distribution for the 2010 season (percentage of total carries among RBs only). 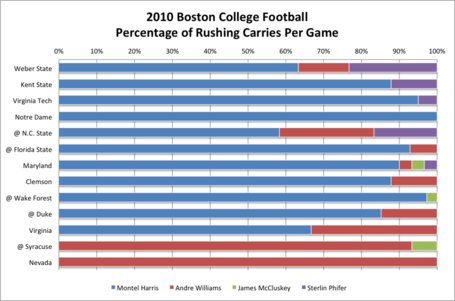 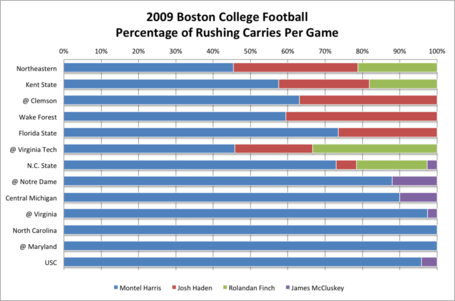 During the first half of the 2009 season, the workload was more evenly distributed between Harris and Josh Haden. After Harris had his record performance at home vs. N.C. State and emerged as the feature back, Haden (along with Tuggle) decided to transfer. The rest of the year Harris was relied on heavily to carry the workload for the Eagles, attempting 125 of 127 carries over the last four games of the season -- including all of the carries among RBs against North Carolina and Maryland.

For comparison, here is the running game distribution for the 2008 season under Steve Logan and Jagodzinski. 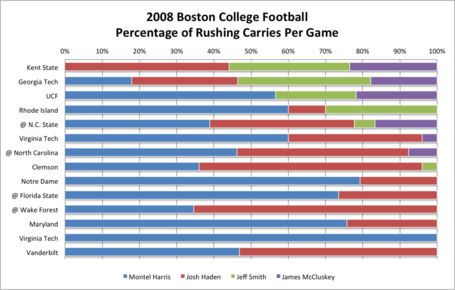 Under Logan, the workload was more evenly distributed between Harris and Haden and the above doesn't even factor in the number of carries Chris Crane had while under center.

In 2009 and 2010, the program relied almost exclusively on Harris' services in the backfield. In 2011, Rogers/Brock and Spaz seemingly yo-yoed Williams, Harris and Finch based on past game performance (and injury in the case of Harris) -- giving the bulk of the carries to one of the three backs in any given game.

So as the Eagles enter fall camp, can Doug Martin and BC successfully implement a two RB system this season? Or will we see more of the same as the team trots out one feature back a game? Which system do you think will be more successful -- reliance on a single feature back or more evenly distributing the work among 2-3 running backs?