Share All sharing options for: The Ultimate Boston College Football Game Series Round Of 16: Notre Dame 2008 Vs. Florida State 2008

The Ultimate Boston College Football Game series rolls on with our final two Round of 16 matchups. As an update, Pools G and H have now closed, with the 2008 victory over Notre Dame advancing out of Pool G and the 2002 victory over -- again -- Notre Dame edging the 2008 win over Florida State in Pool H.

Here is the updated bracket:

Today's matchup pits two victories from the 2008 season against one another. These two wins occurred in consecutive weeks, with BC shutting out the Irish 17-0 on November 8 followed by a 27-17 victory the following week against a #19 ranked Florida State team down in Tallahassee. FSU had worn all-black uniforms for its homecoming matchup against BC, which is a guaranteed loss unless you are playing Duke. Also, this happened: 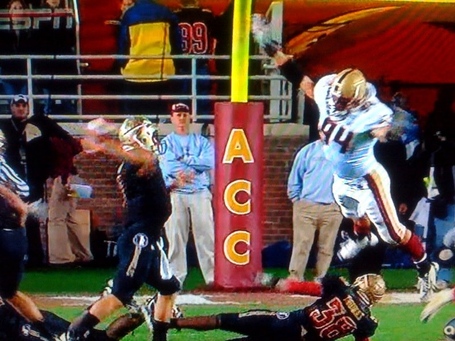 The Notre Dame game the week before was the first and only shutout in the history of the Notre Dame-Boston College Holy War series. Paul Anderson had two INTs, including one returned 76 yards for a TD as the Eagles D turned over Clausen and the Irish five times.

Which victory advances to the Quarterfinals? Voting will remain open through Sunday, August 19.