Late last week SBNation blog and statistical wiz kids Football Study Hall released a staggering amount of data breaking down target, catches and yardage information. In fact there is so much information there, that we are going to have to look at data in multiple posts so stay tuned there for further stat geekiness.

Directly from Football Study Hall are the definitions derived from the statistics they broke down.

Targets = receptions plus incompletions targeting a given receiver. (NOTE: there is no target data for passes that were intercepted or for some throwaways. In the end, about 85-90 percent of passes have target data. I thought about adjusting for that in some way, but since it is the same for every team, I did not. Just keep that in mind.)

Target % = the percentage of a team's passes targeting a given receiver.

Target No. = the rank of a given player in terms of his team's targets.

%SD = the percent of a players targets that came on standard downs. As you'll see, this varies greatly from player to player.

The first set of data we will look at from 2011 is Target percentage. Basically what this data shows is how many times the Boston College quarterback (whether it be Chase Rettig or Josh Bordner) threw to a given receiver in a passing down, which is 2nd and 8 or more, or 3rd/4th and five yard or more.

Whether the receiver caught the ball or not is not quantified in this data. No shock here that Bobby Swigert was the favorite target, getting 25% of the passes thrown to him. If you combine that number with the amount of balls thrown to Colin Larmond Jr, you see that almost half of all balls were thrown to these two receivers. What I found shocking was that Rettig only threw the ball 12% of the time to his tight ends. I have a feeling that number will drastically increase this fall. 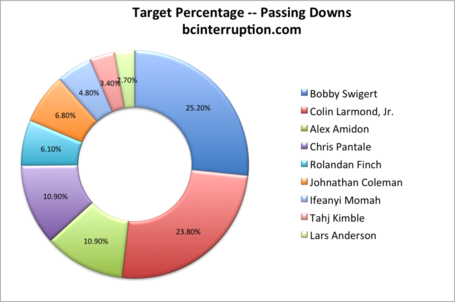 Next, let's look at the data from Standard Downs. Standard downs are all other downs not defined as a passing down. Again we see that Swigert and Larmond constituted more than half of the targets, with Bobby getting a few more looks on these downs. Alex Amidon was only targeted 12% of the time, which is about the same amount that BC QB's targeted their tight ends. In shorter situations you'd figure that BC would look shorter, at more of a high success pass, maybe to Finch or Pantale, but the data does not support this conclusion. 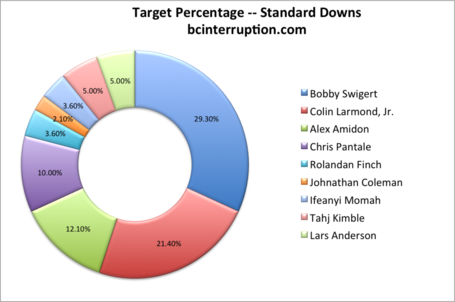 The third piece of information is the percentage on all downs. Again the data is consistent with the other two aforementioned sets. From these three pieces of data it appears that no matter what the down and yardage, BC wanted Rettig throwing the ball to Colin Larmond Jr and Bobby Swigert. It will be interesting to see how Doug Martin would envision this breakdown to look like this year, and whether a new player like Joel Zoungrana could take a chunk of these targeted throws. 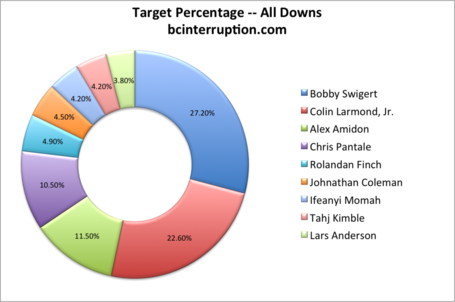 The final set of data we will look at is catch rate. The data below is broken down into three units of measurement, and I will do my best to explain them so you can understand it. Catch rate is the percentage of balls caught by the receiver that is thrown to them. Further this is broken down into types of downs. First, the green bar is passing downs, - second down with 8 or more yards to go, third or fourth down with 5 or more yards to go. Standard is all other types of downs, and all encompasses both.

As you can see below, Chris Pantale was the most consistent receiver in standard downs, along with the running backs--Lars Anderson doesn't count, and Alex Amidon was the probably the most consistent in catching balls thrown to him. While Jonathan Coleman, well he had a rough year and the numbers don't lie. 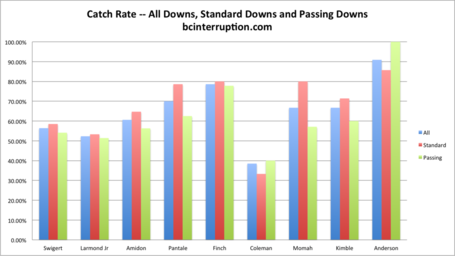