If the Big 12 is going to play the part of Atlantic Coast Conference raider, it will likely do so without the University of Miami. According to a Miami Board of Trustees member, who wishes to remain nameless (natch), it doesn't appear as though the school will be considering a similar move.

"With reports surfacing over the last few days that Florida State would entertain conversations with the Big 12, a member of Miami's board of trustees doesn't see Miami considering a similar move. "It's highly unlikely," the BOT member, who wished to remain nameless, said. "I'm not sure Miami's academic standards are a good fit in the Big 12."

Which is a shame, because it messes up this pretty map. 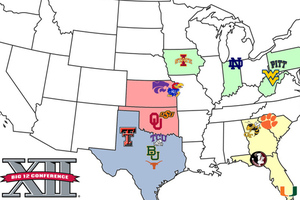 Fans seem to get caught up In the ever escalating arms race for more TV dollars, but I think the issue of cultural fit and like academics is extremely understated. There has been no shortage of quotes coming from power brokers that are meant to save face or prevent a school from getting into legal trouble, but in this case, I tend to believe the unnamed Miami BOT. Miami is a small-ish, private school with solid academics that would immediately become an academic and cultural misfit in the Midwest-dominated Big 12.

Which is a good thing, since I didn't want to see BC have to follow Miami to the Big 12.