Earlier in the week we took a look at an impressive collection of wide receiver data from the 2011 season. Looking at the data, we found a few pieces of information. One, that Chase Rettig threw roughly 50% of his passes at two receivers, and two, the tight ends/running backs were underutilized in the offensive scheme.

In order to get a better perspective of the 2011 data, let's take a step back and look at what happened in 2010. Could the jump from Gary Tranquill to Kevin Rogers/Dave Brock have led to the change? Again we are going to start off with target data, or the amount of times Dave Shinskie or Chase Rettig threw the ball to a given receiver. Let's first look at the passing downs. 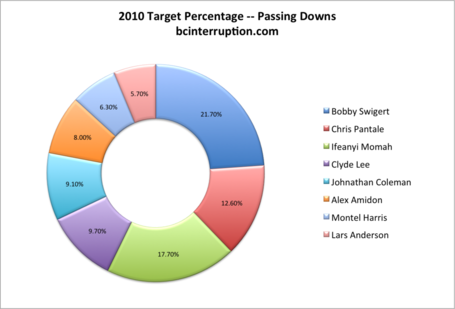 Second let's look at the data from Standard Downs. Standard downs are all other downs not defined as a passing down. As you can see here, BC had six receivers that were targeted roughly 10% of the time each. The tight ends in these situations were thrown to 6% more than they were in passing downs. What I find interesting here is that Montel Harris was a big target getting 10% of the passes, compared to Rolandan Finch who only received 3% of the looks in these situations in 2011. Running backs clearly were less of an emphasis in 2011 than in 2010. 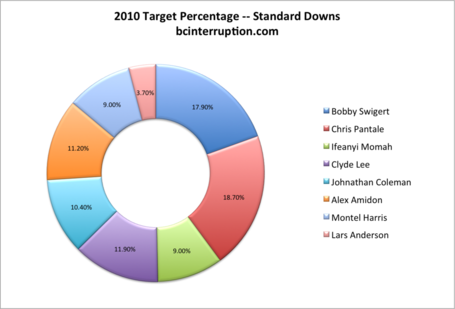 Now let's combine all of the data for one look at how the 2010 passing attack looked like compared to 2011. What strikes me is how top heavy 2011 was compared to the preceding year. In 2011 Bobby Swigert and Colin Larmond Jr. constituted 50% of the looks, while in 2010 the Pantale/Swigert the top 2 receivers only constitute 35% of the passes. Again looking at 2011 there were 4 targets with over 10% of the looks, but in 2010 you can see roughly 6 receivers hovering around the 10% mark. In 2011 it seemed that it was all Colin Larmond Jr, and Swigert, with a smattering of other receivers, 2010 was much more balanced 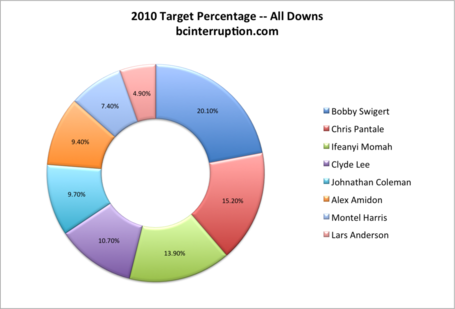 The final piece of data we will analyze is the catch rate of all the players. Looking below you see that Ifeanyi Momah was much more reliable in standard downs, but not much less in passing downs. Chris Pantale was solid in all downs (hint Doug Martin use him more), and Swigert was more efficient in passing downs. Jonathan Coleman wasn't very effective in any situation but still had a better year than he did in 2011. 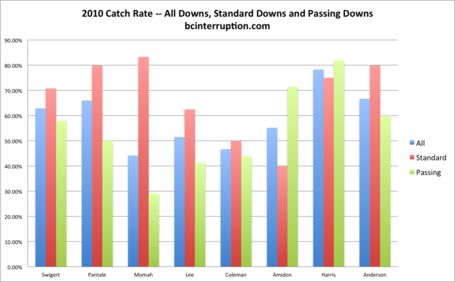