There is everything to be proud of about Boston College Hockey.

It was a run for the ages. Nineteen straight wins. Nineteen. I remember just before we played Merrimack, riding a modest 5 game winning streak, and my father in law asked me how I felt about the team. I told him that if we swept Merrimack, we would win out and take the title. He said "that would be nineteen wins in a row... that would be pretty tough." I said "well that's not really... ok, that's really a lot of games.... I don't know." As good as I felt, riding high after the big win in the Beanpot and a hefty 6-1 curbstomping of the Catamounts, a 19 game winning streak just felt unattainable. Who knew?

In those nineteen games we watched BC hockey become one of the most dominant teams in recent memory. Everything came together. Each facet of our game was played at such an exceptional level that if you happened to walk through Conte Forum before an Organic Chemistry exam while our team had practice, you'd have been guaranteed an A. Too bad you didn't know it at the time.

We got on the board first, but our first period wasn't exactly the best we've ever played. It was very even, and given how things have gone lately, that was just unacceptable. But nonetheless, Steven Whitney lit the lamp just three minutes in after a bouncing puck eluded the Ferris State defender and ended up on the tape of Barry Almeida. Barry chirped the puck across the streak onto Whitney's waiting backhand. 1-0 Eagles.

While all analysis suggested that BC would probably have no trouble if they scored the first goal, the Bulldogs had no intention of letting the game let out of hand like the Gophers. Ferris State's Garrett Thompson threw in a rebound just two minutes later to knot the game at one... Uh oh.

But not to worry. One of our strengths toward the end of the year has been our power play, and after a tripping penalty on Brett Wysopal midway through the first period, Brian Dumoulin fired a wrist shot in on net that Paul Carey managed to barely redirect, and the puck hit twine. 2-1 Eagles.

But that's how the game would stay for much too long. No more goals in the first period, and none at all in the second. Boston College fans surely started to feel concerned, as this game wasn't supposed to be close. Ferris State played well, but it was Boston College's play that dictated the game. Through the first two thirds of the game, we were just... a bit... off. Passes would be just out of the reach of their recipients. Sloppy play would allow Ferris State to come in on an odd man rush. It felt far too much like Michigan State in 2007. We were letting a team with less talent hang around much too long.

Finally, late in the third period, Johnny Gaudreau felt it was time to calm our frayed nerves: 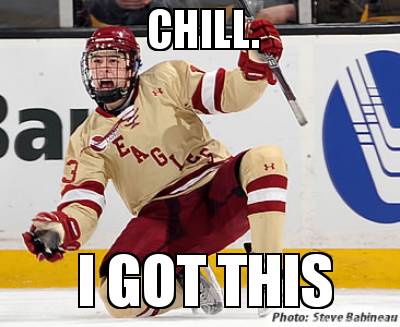 Conrad can confirm, but I believe that is the hockey equivalent of getting P-P-P-POSTERIZED.

Party on. Steven Whitney sealed the deal with an empty netter with a minute left, and the streamers were flying.

Parker Milner was spot on, again. Jerry York was gracious in victory, obviously, congratulating Ferris State on a hard fought win. Paul Carey had what might have been the best game of his career. Johnny Gaudreau did the hockey version of an "lol."

Remember when we had just been swept by Maine? We were 6-9-1 in our last 16 games. See that "9"? That means all but one of our losses came in that stretch. Who would have thought that we would rattle off the incredible streak that we did.

Who has more fun than us?