Just like last week, I'm writing this about five hours past my bedtime, so bear with me.

BC and BU played an absolute thriller for just under 80 minutes. In the end, Boston College prevailed 3-2. Bill Arnold scored the game winning goal with just 6.4 seconds remaining in the first overtime.

There is just so much to say about this game. First and foremost, it was one of the best games of the last several years. The quality of play was just unreal. Second and secondmost, God, it just feels so freaking good to crush the souls of the Terriers. Yes! Yesss! Oh, let me taste your tears, BU! Oh, the tears of unfathomable sadness!

BC started the scoring about nine minutes in when Pat Mullane wristed a beautiful shorthanded goal over Kieran Millan's shoulder. The Eagles led in shots in the 1st period, 16-9.

The second period felt like it was all BU. The Terriers finally broke through and tied the game with under 5 minutes left in the period. Fortunately, Chris Kreider exists, and he put the Eagles back ahead 2-1 with a power play goal with just over a minute left in the period.

BU scored the only goal of the 3rd period on a 5-on-3. The game featured several 5-on-3 opportunities for both teams -- but, that's to be expected when Tim Benedetto is your referee.

Finally, we get to overtime. Boston College dominated the last 20 minutes, though the Terriers certainly had their opportunities. It was a very up-and-down period (surprising for an overtime period, really, where a lot of the time you see teams play very conservative). Finally, Bill Arnold sent the Superfans home happy with a wrister with just seconds remaining. The goal was featured as #1 on ESPN's Top 10 and made Bill Arnold a trending topic nationally (!) on Twitter:

The BU student section, I'm happy to report, cleared out faster than it would have if there had been a fire drill at the Garden.

Kieran Millan won the award for top goaltender -- it is given to the goalie with the highest save percentage in the tournament, so it's just simple math -- but Parker Milner was just sparkling. Again. He has improved each and every game he has played since his long layoff, and the Superfans noticed. They were raining praise down on him throughout the night, and especially post game during the awards ceremony.

The Superfans were again out in force. After the winning goal, a slew of streamers came flying out of the student section (you can see them very clearly in NESN's highlights). There were -- cough -- 63 streamers. But I had nothing to do with them or anything. Cough. 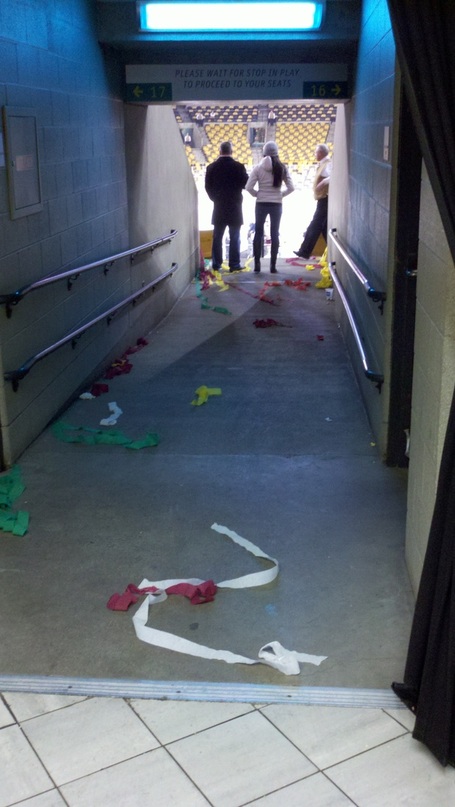 The win vaulted us up to #2 in the Pairwise Rankings. More importantly, we're now the top of the eastern teams, which means if the season ended today, we would be the #1 seed in Worcester. Taking the top overall seed is important, however. It would match us up with a far weaker team than it would if we were #2 overall -- the 16th seed will not be ranked very highly, as it will be the champion of the weak AHA conference.

I'm exhausted, so I will leave you with the game highlights:

Worth noting is that this game marked Jerry York's 899th victory. Go out to Conte Forum on Friday night against Merrimack for a chance to see history!