The final game of the season. But just think, it is Frank Spaziani's final game at the helm. That is a positive right?

After eleven simply awful and borderline unwatchable games, the 2012 season mercifully comes to an end down in North Carolina. It is a game of two coaches that most likely will never return after this season. Frank Spaziani vs Tom O'Brien. The master vs the student. Bubble screens, poor clock management, bland offenses and shattered expectations all guaranteed this weekend!

Will Chase Rettig survive the season in one piece? Who will throw more bubble screens, Rettig or Mike Glennon? Rolandan Finch's issues are clearly cured, can we please stop the David Dudeck experiment? Will Andre Williams ever return? Can Spencer Rositano continue to be the turnover machine none of us expected? Spiffy Evans, does he have another explosive return in the finale? This game has to be more interesting than the 2011 matchup in Alumni Stadium right? Can BC stay close to the Wolfpack or will this be 2010 all over again?

Seriously, at this point is anyone even watching this game? What is the over/under of #firespaz comments made at Brad Bates during the game? Chase Rettig, and Emmett Cleary have come out in support of Spaz, what would players like Colin Larmond Jr./ Kaleb Ramsey / Dillon Quinn / Rolandan Finch have to say if they were asked? Wonder what merrymen like Jon Meterparel really thinks about this team.

What To Drink As You Celebrate Frank Spaziani's Final Game As BC's Head Coach: 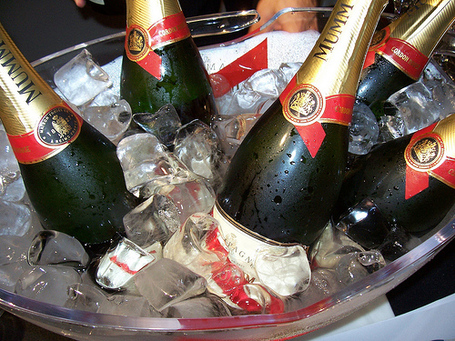 We made it! Hurray, pat yourself on the back, you successfully survived four years of Frank Spaziani football. As you sip the bubbly think to yourself, "Hey I watched my team go from a two time ACC Atlantic winner to the door mat of the conference!". This is no small feat my friends. It takes a lot of talent and dedication to destroy a successful system, and a solid program, but gosh darn it Spaz was dedicated!

Tomorrow is a momentous occasion, so make sure to get some really nice stuff, none of that $5 bargain bin crap. The end of the Frank Spaziani error is a one in a lifetime affair, and should be treated as such. So hug your loved ones, dance around naked, sip the champagne out of gem encrusted goblet, and party! Because change is coming, and you survived the darkest days of Boston College athletics! Cheers BCI Folk!

CAW CAW BAWDWIN JUNYOR REPORTED FOR DUTEE! I'S GOT GREAT NEWZ YESTERDAYS WHEN BRADLEE BATES TOLD ME THAT I WUZ SUCH A GREAT FAN THAT I WUZ NOMINATERED TO BE ON THE COACHING HIRING COMMITTEE! WUT A JOY! IT IS SUCH AN IMPORTANT HONOR THAT I WANTED TO TALK TO MY BESTEST FRIEND AND GET OPINION FROM FRANK SPAZIAMIANI. HE SAYS THAT THE NEXT BC COACH NEEDS TO BE JUST LIKES HIM, AND PUNTS ON THE OPPONENTS 40, AND THROW PLAYERS OFF DA TEAM. HE GAVE ME A NAME TO RECOMMEND FOR COACH. SO I WILL CLUES YOU ALL IN. THE NEXT BEECEE COACH WILL BE HANK FRAZIAMIANI!

I HATE THIS SONG WITH ALL MY BEING, BUT WHEN IT IS FRANK SPAZIANI'S LAST GAME, YOU HAVE TO PLAY THIS RIGHT? IT'S DISCO AND IT IS TERRIBLE, JUST LIKE SPAZIANI'S TENURE.

BCI Game and "When will Frank Spaziani Be Fired" Predictions

(Note the Spaz predictions are guesses on when a BC beat writer will break the news, not the AD actual press conference. Using Price is Right rules here, closest to the actual time without going over is the winner)

Leave your guesses on when Spaz will get the pink slip in the comments! Winner gets to be coach of the BC Eagles!

Last game of the season, make sure you let the coach knows how you feel on our Facebook page!

The final game of the season. Watching the game? Given up? Leave your thoughts in the comments! Go Eagles!