Boston College 20, Maryland 17: The Good, Bad And The Ugly

Breaking down the Eagles 20-17 victory over the Maryland Terrapins.

Share All sharing options for: Boston College 20, Maryland 17: The Good, Bad And The Ugly

Finally the Eagles are back in the win column with a great come-from-behind win against the Terps yesterday at Alumni Stadium. But everything wasn't pretty in this game. There were certainly things BC will need to improve upon if they want to continue winning. So let's break down the win.

The Final Drive -- Call me jaded but I thought BC was toast after watching Maryland take the lead with only 6 minutes left. But the Eagles and especially Chase Rettig looked composed and methodical moving the ball down the field, hitting multiple passes to Alex Amidon and Chris Pantale. Maryland looked completely lost on defense for the first time during the game, and inexplicably blew coverage when Johnathan Coleman caught a wide open screen pass for the win. Definitely an exciting way to win a game.

The Turnovers -- Maybe it was the change of personnel, maybe it was facing a fourth string quarterback, but whatever it was, BC was opportunistic yesterday. BC picked off Caleb Rowe three times, including a game clinching interception by Spencer Rositano on the first play of the final Terp drive. Justin Simmons also had a great game, making a nice interception, and Kieran Borcich also added to the take aways.

Spiffy Evans -- With the return of Bobby Swigert (who seemed invisible for most of the game) Evans has been relegated to special teams, and he has excelled at it. Evans had an electric 72 yard punt return, and gives BC a threat on special teams that they have lacked since Jeff Smith and Will Blackmon.

Run D -- It doesn't hurt that Maryland's run offense was putrid, and that they threw the ball 42 times, but give credit when credits due. The Eagles held Maryland rusher Wes Brown to 42 yards rushing. The Eagles looked cleaner on tackles, with fewer misses, and made Maryland one dimensional. 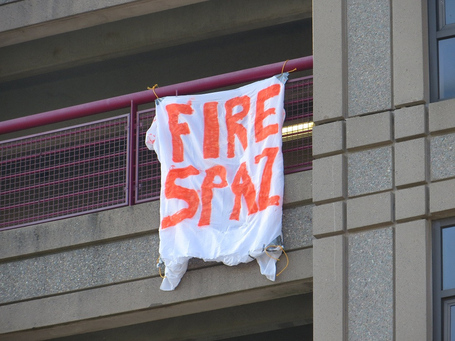 Third Down Offense -- Boston College was awful yesterday on third down, and that is an understatement. If my memory serves me right, they didn't have a single conversion in the first half. They finished the game going 3 for 13 on 3rd down conversions.

Allowing Maryland To Get Back Into The Game -- The Eagles controlled the game for the entire first half, but the king of halftime adjustments had the Eagles looking flat and reeling in the second half. As Brian said earlier, this is completely unacceptable:

BC Fans In The 4th Quarter -- When Rettig threw the touchdown pass to Coleman to give them the Eagles the lead, Alumni stadium was half empty. After Diggs caught his touchdown pass minutes earlier, BC fans headed for the exits. Honestly with the way this season can you blame them? Just another statement of what BC fans think of the current state of the football team, but in the end I feel bad for the players. They never gave up, and they treated fans that stuck around with an epic ending of a game.

Andre Williams' fumble into the end zone -- Spaz may want to bench Rolandan Finch for whatever reason he has, but it is clear the issue isn't the players here. Poor ball security is up and down this running game, and that is on Jim Bollman who apparently isn't interested in teaching players how to hold onto the ball. Andre Williams fumble was brutal, and was ominously similar to Finch's earlier against Miami.

Stefon Diggs 66 Yard Touchdown Catch -- Three plays is all it took Maryland for Maryland to take the lead in the fourth quarter. Diggs, who is electric, went completely untouched for the touchdown that put the Terps ahead 17-13.