Boston College has yet to beat an FBS team this year, and this weekend's matchup against Georgia Tech looks especially unfavorable for the reeling Eagles. However this is the same GT team that just fired their defensive coordinator and have their own dirty little secret in their past--a loss to Middle Tennessee State. Brad Bates will be on hand again to watch BC, before heading back to Chestnut Hill to watch hockey raise another banner. What will he be thinking on the ride home?

Has the defense learned anything over the past six weeks or are we doomed to watch more blown coverages, terrible pass rush, and weak tackling? Is Frank Spaziani mentally capable of making in game and game to game adjustments? Is this going to be Army all over again? Rolandan Finch, where are you?

Last week Spaz found a new way to infuriate fans by needlessly burning the redshirt of DE Malachi Moore. What new thing can Spaz unveil to aggravate us even more? Can someone ask Paul Johnson if we can borrow the Ramblin' Wreck and have Spaz drive that out to midfield for the rest of the season? Is BC going to play two halves of football this week or can we turn off the television at halftime? 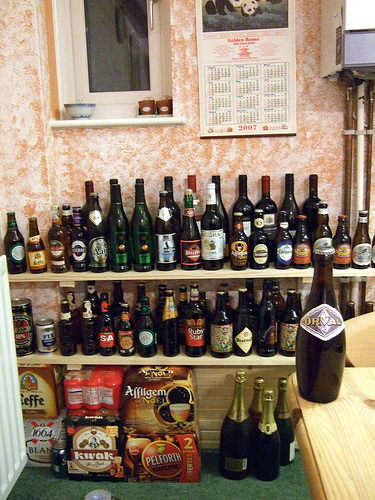 Harpoon Harvest Ale. This week we feature Phil K, a regular reader of the blog who chimed in with his beer choice.

I tried a fresh batch of Harpoon Grateful Ale at the Harpoon brewery the other week and enjoyed it. It features cranberries, so it has a hint of a fruity taste, but nothing overpowering or too sweet (i.e. not a girly beer). Plus, Harpoon donates $1 per six-pack to a local food bank in the area in which it was purchased - a great way to support your community even while watching our miserable football team.

CAW CAW! PARDONS THE BAWDWIN JR FOR ALL THE BAD THINGS I SAYS ABOUT FRANKS SPAZAMIANI. I NEVERS MADE A JOKE ABOUT HIM, AND HIS MUSTACHE IS ONE OF DA FINEST I'S HAS EVER SCENE! PLEEZE SPAZ, WE'S ARE FRIENDS! I'S PROMISED I'S NEVER EVER MADED A JOKE ABOUT YOU! MY BESTEST FRIEND COLIN WAS PUT ON TOWEL DUTY FOR THE REST OF THE SEEASON AND SPAZ SAYS THAT THE NEXTEST PLAYER TO SAY BAD THINGS ABOUT HIM WILL BE GIVEN THE SAME PUNISHMENT. AND HES ALSO SAID THAT THE NEXT MASCOT TO SAY BAD THINGS ABOUT HIM WILL BE TURNED INTO A INFLATIABLE CASTLE FOR CHILDREN! OH NO! SO UNRELATED TO THIS, I PREDICATED THAT BOSTON COLLEGE WILL BEAT GEORGIA 345-0! CAW CAW

The Ratio - The GTGs. When I started this feature I thought I would just pick throw back rap songs, but then I discovered that seemingly every college has a dark secret. They have a few token students who think they can rap or croon in their school gear. First there was Northwestern's Chet Haze, now there is The GTGs. This song is beyond unlistenable. It's what I imagine Drake sounds like, but don't know because I don't listen to terrible music. They can't sing, they can't rap, the topic is stupid. Be forewarned.

Joe -- No prediction, but it's safe to say he probably picked against the Eagles.

Did anyone make the trip to down to Georgia Tech? Partying it up at a BC bar? Showing off your Eagles maroon UA red and gold khaki? Show your Eagle pride by sharing your pics on our Facebook page!

How are you feeling about this upcoming game against the Yellow Jackets? Do the Eagles even have a chance? Leave your thoughts in the comments.