Students and fans leaving early in the fourth quarter before the clock hits 0:00 -- fair or foul?

There are a number of different aspects I want to discuss further regarding Boston College's 45-31 loss to Clemson on Saturday -- everything from the run game to the offensive playcalling, the porous D and the Grey Poupon uniforms. But one thing that was brought up in a conversation about how we can fix Boston College football was the student fan attendance. Or lack thereof.

Here's a pic I snapped (before my phone died) as the teams ran out onto the field. 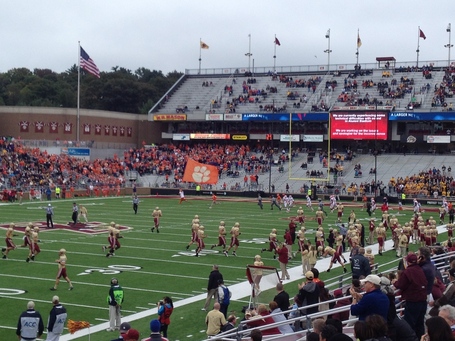 Note that all Clemson fans are in their seats at kickoff. And here's a pic I took a little later in the game. 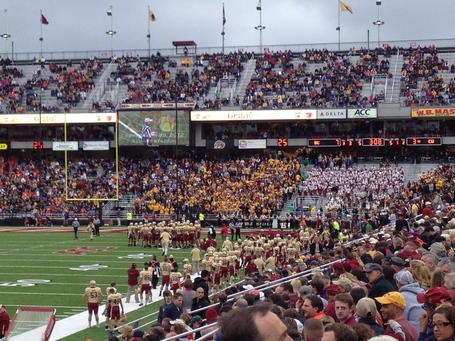 The student section eventually did fill up and in general, student attendance has outstripped general attendance at both the games I attended this year (Miami and Clemson). But a strange trend has started happening the last few years.

Early in the fourth quarter with the Eagles down two scores, the student section again started to slowly thin out. But the time there were only a few minutes left in the game, the student section looked more like the pregame pic than the packed Superfan section of the second and third quarters (though I couldn't snap a pic after my phone died in the cell phone vortex of drain that is Alumni Stadium).

The question is whether students leaving early is fair or foul.

I'm of the opinion that the customer is always right. Fans and supporters of this team have seen this story before. BC starts the season 1-3 for the second consecutive season. The team is winless against AP ranked opponents under Spaz. The trajectory of the program is clearly on the decline. Everyone knows this but little has been done or said publicly as to how the department and the school plans on correcting this downward trend. I don't fault the students and fans for leaving early. It's on the department and the program to improve the on-field product, improve tailgating and the overall gameday experience if you want more fans to show up and want fans in their seats both early and late.

The counter argument is that fans don't deserve to support a winning team if they can't support the team when they're losing. Particularly the students, the players' peers -- the one section of the stadium that the team truly feeds off of in terms of the energy and enthusiasm they display on Saturday. Stick with the program through thick and thin, the good and bad. How does it look to the program when the Superfan section and the rest of Alumni Stadium is half-full midway through the fourth quarter?

Like I said, I get the counter argument, but I'm of the opinion that fans and students walking out on the team before the game is over is a referendum on the current state of the program. The trend is symptomatic of the program's larger issues; not part of the problem. There's a lot that needs fixing for Boston College football, but until the school and the department openly addresses those issues, the team will continue to have students and fans walking out of Alumni well before the clock hits 0:00.