After two surprising ACC wins against Clemson and Virginia Tech, the Boston College Eagles have fallen on hard times. Donahue's young squad got smacked by NC State and then returned home to face the Demon Deacons of Wake Forest. The clash between these two teams was quite hard to watch for anybody who enjoys the game of basketball and even harder for those of us rooting for BC. Wake basically dominated the entire game, yet allowed the Eagles to hang around. Ultimately, WF managed to open up a big lead and cruised to a 71-56 win.

First of all, Wake Forest is simply a more talented team than BC. They were garbage last season, but led by CJ Harris and Travis McKie, the Demon Deacons are actually relatively talented this year. I can't really complain about this loss too much because the better team won. It would have been nice to see BC pull it out, but after seeing these two teams face off, there is no question in my mind that Wake Forest is the better/more talented team.

BC's youth showed once again. This is what you get when you have a million freshmen on your team and almost all of them are playing meaningful minutes. The offense got incredibly stagnant and every single possession on the offensive end was a battle. There were no easy buckets for the Eagles today. While it's easy to blame the youth of guys like Patrick Heckmann and Dennis Clifford for not being more assertive and taking the open shots, much of the credit has to go to Wake Forest. Ty Walker is an enormous human being. He's got a huge wingspan and is someone that you have to be conscious of at all times. Walker had 6 blocks in total and some of them might have been goaltending, but that's just a further testament to how high this kid jumps. He's asserted his presence early on and probably forced BC to think twice about every shot that they took in the paint.

Did I mention that this game was incredibly hard to watch? Take a look at what some of the tweeps were saying about the game today.... 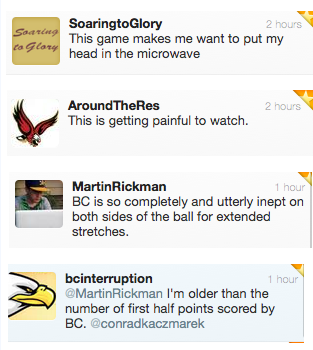 The overall quality of play was pretty bad, as both teams loved to turn the ball over. Three separate times, Wake Forest players simply stepped out of bounds to give the ball back to the Eagles. Who does that? How do you step out of bounds 3 times?

BC led many of the important statistical categories (Offensive rebounding, free throw attempts, turnovers) for much of the game but it was simply not enough to overcome the putrid shooting. BC shot just 1 of 10 from 3-point land in the first half and finished 4 of 21. Overall, the Eagles shot just 31.1% from the field while Wake Forest shot 44.1%. I don't really care what else you do in the game if you shoot 31 percent, you probably aren't going to win.

BCInterruption's Player Of The Game:

Of all the Eagles, Anderson was probably the best. He recorded his fourth double-double of the season, grabbing 11 rebounds to go with 13 points. Although he shot just 4-11 from the field, that was basically the best shooting performance on the team. He didn't turn the ball over at all and showed flashes of brilliance against Ty Walker in the post. There weren't many bright spots in today's game, but Anderson continues to look like a guy who can develop into a very solid ACC player in the future. Give him a couple years and we'll be seeing some real nice production.