Chase Rettig, BC on the offensive (BostonHerald.com)
"When I heard the news (that Rogers was taking a leave of absence), my head spun a little bit, but I don’t feel like it’s spinning anymore," said Rettig, who has also dealt with a spate of injuries to teammates. "When something like this happens, you just have to pick it up as it happens and you can’t let that distract you from what the most important thing is on Saturday, which is winning."

Quarterback Chase Rettig looks to lead Boston College football team to first win (The Boston Globe)
"You definitely feel obligated to ante up your role as a leader,’’ he said. "You just want guys to have the right mind-set. It’s tough. When there are things that you can’t control, you have to just pick up and roll with it. You have to have the best attitude you can.’’

BDN previews Duke’s ACC opener at Boston College (Blue Devil Nation)
Two winless teams with the lowest scoring offenses in the ACC will meet on Saturday, but only one will emerge a winner. The BC offense has looked lost without Montel Harris to hand it off to 30+ times a game. Duke’s offense has moved the ball, but failed to score. The historically stingy BC defense has given up yards and points this year, while the Duke defense has performed better than expected, but inconsistently. In the end, Duke has too many offensive weapons for the depleted Eagles’ defense, and the Blue Devils’ defense should put together another strong showing against a struggling BC offense. Sean Renfree gets back on track and into the end zone in this one, and Juwan Thompson will have a third straight solid game on the ground. Duke 28, BC 13.

Week 3: Did you know? (ESPN ACC Blog)
Boston College’s defense has so far faced opponents who have run the ball 67 percent of the time. Northwestern and Central Florida combined to record 99 rushing attempts times out of 148 total plays called. They combined for 462 yards on the ground, six touchdowns and averaged 4.7 yards per carry and 231 yards per game. The Eagles led the nation in rushing defense last season.

ACC would be a welcome place for Longhorns to graze (BostonHerald.com)
Basketball: Not that the folks making decisions care a great deal, but Texas basketball is a long shot better than Miami, Boston College and Virginia Tech, the past three ACC annexations.

An offseason look around the ACC (ESPN College Basketball Nation Blog)
Boston College is rebuilding after losing top scorer Reggie Jackson to the NBA draft, as well as four other top scorers. The hope is that a four-player recruiting class from California, led by top 100 recruit and Mr. Basketball Ryan Anderson, will inject life back into the program.

Former Women's Basketball Player Enters Hall of Fame (BCEagles.com)
Former Boston College guard Amber Jacobs is one of 14 former Boston College athletes and administrators comprise the Class of 2011 to be inducted into the Varsity Club Hall of Fame tomorrow night at a ceremony in Conte Forum. She is the 10th women's basketball player to be inducted.

No. 11 Men's Soccer Hosts Viginia Tech Friday Night (BCEagles.com)
The Eagles (4-1-0, 0-1-0 ACC) are coming off their first loss of the season - a 4-0 setback at Maryland last Friday - that moved the Terrapins to No. 1 in the country. The Hokies (3-2-0, 1-0-0) knocked off former No. 1 North Carolina in Blacksburg last weekend, winning 1-0 in double overtime. Virginia Tech has won each of its last three matches.

No. 8 Field Hockey Meets Two Top-Five Teams This Weekend (BCEagles.com)
The Boston College field hockey squad looks to add to extend it three-game win streak against two nationally ranked opponents this weekend. On Friday, Sept. 16, the Eagles will host No. 3 Maryland at 6 p.m. in the team's first Atlantic Coast Conference (ACC) matchup of the season. BC will then travel to Storrs, Connecticut to square off against the No. 4 Huskies on Sunday, Sept. 18 at 2 p.m.

Finally, this was embedded in a post about PETA calling on Auburn to retire its live mascot, but thought it was appropriate given the week we've had. 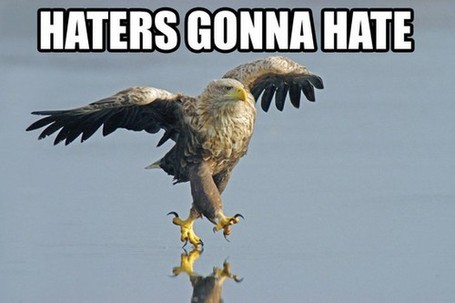