The Northwestern blog BRING YOUR CHAMPIONS, THEY'RE OUR MEAT gives us this pic of Luke Kuechly. 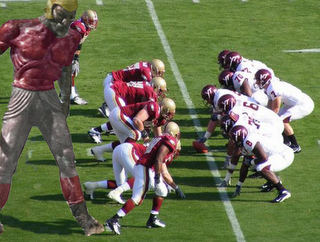 Williams practices; Fletcher doesn’t (Boston Herald)
Cornerback Donnie Fletcher, however, was not practicing during the media portion of the practice. Fletcher suffered a back injury in a scrimmage two weeks ago and hasn’t been able to practice since then, though it’s still hoped that he’ll be able to go on Saturday. He’s listed as the starter on the depth chart, but true freshman Albert Louis-Jean was taking the reps at the field corner. If Fletcher can’t go, then strong safety Jim Noel will be the most experienced starter (eight starts) in the secondary.

BC’s Hampton Hughes finally settles in (BostonHerald.com)
Boston College free safety Hampton Hughes was not about to take anything for granted. He is, after all, a former walk-on who was a wide receiver just a couple of weeks ago. But when you start in the final scrimmage of the summer, and you produce the way he did (an interception and two passes defended), you have a right to believe you nailed down the starting spot.

New Boston College OC Kevin Rogers Returns To His College Roots (SB Nation Boston)
Boston College's offense was among the worst in the nation the last two years, but with the hiring of new offensive coordinator Kevin Rogers, all of that could change.

Lindy's 2011 ACC Team Preview: Boston College Eagles (Lindy's)
Spaziani inherited a team that made an appearance in the ACC Championship Game in back-to-back seasons. Since that time, Boston College has been an average ACC team, beating the teams it should beat and losing to the upper-echelon teams. The talent looks to be restocked at the Heights, and Spaziani’s club should at the very least be a factor in the ACC Atlantic this season.

BC offense ready to pull its weight (ESPN ACC Blog)
"I’ve said to the guys a few times, ‘Aren’t you just tired of hearing people say, ‘defense, defense?’ There’s two sides to the ball," said Larmond Jr. "It’s always just the defense. That’s something that has to get to you guys. … Now they’re playing with a little bit of a chip on their shoulder and trying to prove that it’s not just BC’s defense, it’s BC’s whole team."

Meanwhile, In Non-Persa News (Lake The Posts)
It leaves plenty of mystery for Boston College’s linebackers to figure out. Although, it appears the Cats will use a running back by committee approach until somebody emerges. I still would not count Adonis Smith out and we will see him, Trumpy and Schmidt all on the field at some point Saturday.

Gettin' Familiar With: Boston College (Sippin' On Purple)
Act the Third: Montel Harris emerges as the hero. BC rolls off five straight victories against the chaff of the Big East, (Ed. note: ACC. Whoops. Not like it makes a difference.) with Harris eating up 100+ yards on the ground in four of the games before missing the season-closer against Syracuse due to injury.

Video: Boston College needs strong start (ESPN ACC Blog)
Heather Dinich looks at the importance of a strong start for BC, given their tough second half of the season.

2011 Bowl Projections - Preseason Final (Off Tackle Empire)
Boston College will be good enough to get to a bowl, but expecting more than 7 wins is asking too much.

No. 14 Field Hockey Falls to Maine in Overtime, 4-3 (BCEagles.com)
The No. 14 Boston College (2-1) field hockey squad lost a hard-fought, overtime battle against Maine (2-1) on Tuesday afternoon.

Andre Williams on Twitter @drewill44
Practice was good today. Not surprised we handled it so well just proud. #BCEagles bout to surprise some people I promise.