Getting your first Superfan shirt is a rite of passage for every BC student. At your orientation you are initiated into the brotherhood and sisterhood of BC fans. One of my favorite parts of the fall is seeing what the new shirt slogan will be. As your resident fashionista, it is time to unveil the new BC logan. Drum roll please. 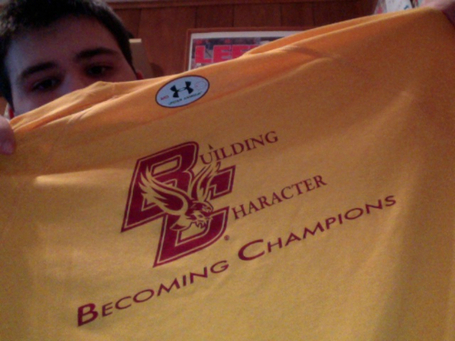 No that isn't me, but thanks to whatever student put that up on Tumblr so I could share it with you all.

I gotta say I really like the slogan. After years of slogan misses like "Ignite the Heights with Spirit and Truth," BC knocks this one out of the park. It incorporates the Jesuit values of the school, and combines it with the goals of the athletic program. Pretty much a perfect slogan for what BC Athletics values right? I'm sure it will encourage a lot of snark and sarcasm though from opposing fans. I can hear it now "What championships have you won?"

Now let's compare it to years past:

For me the years 2002 through 2008 are just classics -- ones that I think BC should contemplate reusing in the future. It's the years after that lose it for me.

For 2009, I don't like the "Get Ready" part of the slogan which really doesn't make any sense. 2010-2012 I like, again taking some of the classic BC slogans and adding a new twist to them. I thought last year's slogan was terrible, it sounded like something I would have heard in a theology class, not something that inspires you to root for a football team.

So where does this year's slogan stand amongst the previous years?