The divorce is on. With the Texas A&M Board of Regents granting President R. Bowen Loftin the authority to discuss the Aggies conference affiliation, A&M is inching closer and closer to leaving the Big 12 for the SEC. With the Aggies move comes speculation that a 14th team would have to be invited. There has been widespread speculation that Missouri, Virginia Tech, Florida State and Clemson, among others, may be targets for SEC expansion.

This has caused an outbreak of irrational exuberance among ACC fan bases whose schools are being considered for SEC membership. Below is the current ACC SECession threat advisory level, as told by the various fan bases. 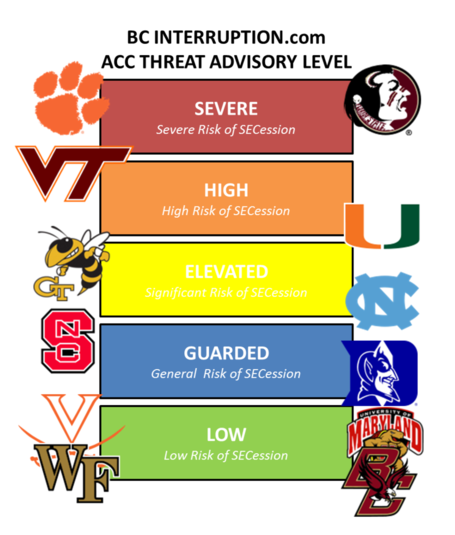 "FSU athletics should love to bolt from the ACC. FSU is the most important school for the ACC, financially. And yet the ACC insists on scheduling a marquee game (@Clemson) a week after we host the Sooners. And, while arguably forced into it via the ESPN / ACC TV deal, making FSU play a road game a thousand miles away, at night on a Thursday with 4 days rest, doesn't seem like much incentive toward any ACC solidarity on FSU's part."

Clemson fans don't seem to be too fond of and/or committed to this "crap" conference. THREAT LEVEL = RED.

"Finally, I am worried that Barker would tell the SEC no, even before a mega-ACC expansion. He won't do that right. Please tell me I'm crazy. He is letting TDP work this right and is letting him call Slive that Clemson would love to be considered for an SEC expansion. He won't let the SEC take FSU and potentially another school from the ACC and say we are committed to being good in athletics and academics right? He won't say that Clemson turned down SEC overtures because we are committed to this crap conference, and our academic reputation is still intact. He won't be that crazy...right?"

Virginia Tech sees DOLLAH, DOLLAH BILLS and FOOTBAU in the SEC, despite having to wait 50 years to finally get with the Hokies' high school sweetheart. THREAT LEVEL = ORANGE.

"If Offered, We Should AcSECpt, I wrote that column last summer and still believe it's in Tech's best interest to be part of any SEC expansion plans. This SEC is home to the last six national champions, prestigious bowl tie-ins, is building a national digital network and has an insanely lucrative television contract."

N.C. State is all like, don't forget about us, y'all. THREAT LEVEL = BLUE.

"All that said...would State make that leap? Should they?

"I think the answer is a clear "Yes" if given that opportunity.

While we pine for the venerable ACC of yesteryear and curse the thought of leaving a league founded in large part because of the vision of Everette Case and N.C. State, the cold, hard facts are these: Expansion is inevitable, and there will be those left out who suffer tremendous financial consequences because of it.

If State's leadership makes decisions based on the past without considering the evolution of college athletics, we will be left even further behind than we are now."

The Cavaliers are asking, do you guys play lax, brah? No? Alright cool, man. We wouldn't have been able to class up your conference academically anyway. THREAT LEVEL = GREEN.

"And even in unrealistic scenarios where the ACC gets WAC-ed and like four or five teams jump ship to other conferences, UVA will still be in OK shape. Remember who makes the decisions, yes? College presidents. And what does UVA do best? No, not lacrosse or baseball or soccer, though we do do those things rather well. What we do best is to be an academic powerhouse. Worst-case scenario, we use that academic reputation plus an alumni base in two major East Coast cities to get in to one of these fancy clubs somewhere. So don't panic. Things may not end up how you or I want them to, but they won't end up poorly either."

Maryland is like, SEC? Psh. Who needs the SEC when both the Big Ten and Big East are on our turtle nuts. THREAT LEVEL = GREEN.

"And, of course, the Big 10 may very well react in that scenario. Which means Maryland might be a target. Again. And with new leadership in place - including a university president who used to be in the Big Ten - they might be a little more receptive to the idea.

Even if they don't look to Maryland, they'll look to the Big East schools that the ACC could've added to prevent being lost in the shuffle - namely, Syracuse, UConn, Rutgers, and Pitt, a foursome I'd love to see added. The problem, of course, is that it's probably going to be difficult for the ACC to be proactive here: if a school is attractive enough to be a candidate for the ACC, they'll probably also be a candidate for the Big 10, and in that case they'll wait out to see if the B10 extends them an invitation. Not that John Swofford would do it any other way, but his hand may be forced into reactivity here."

Finally, even some Boston College fans aren't exactly above board when it comes to making side glances at other conferences and presumed greener pastures. THREAT LEVEL = GREEN.

"The main reason that BC should consider this move [to the Big Ten] is stability. The question isn't if the ACC will get poached by the SEC, it's when. However, the Big Ten showed with the addition of Nebraska that they are going to do the raiding instead of being raided. The only other conferences that could challenge them in terms of power, the SEC and Pac-12, can't take Big Ten teams due to geography. So, going to the Big Ten would assure BC long-term stability, something the ACC doesn't currently offer."

Of course the moral of this story is that sure, you can appear somewhat eager for your program to join the SEC, but don't appear too eager. You wouldn't want something you write on the internets to come back to you when the SEC goes and does something totally logical like invite West Virginia as program #14, now would you?