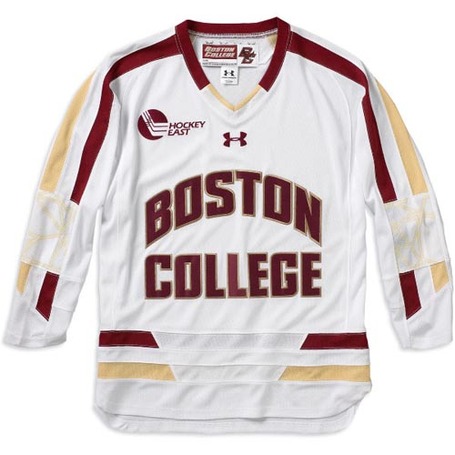 In BC Interruption's never-ending quest to become the college sports fashion police, we would like to unveil this year's Under Armour hockey jersey. Unlike the changes to the BC football jersey, I have to say I kind of like the changes here. It is true I am more of a modernist when it comes to jerseys -- I love the 427 variants of the Oregon Ducks football uniforms -- so of course I would embrace the new hockey jerseys.

The changes are kind of small. First Under Armour removed the Boston College logo off the shirt. Is that really a bad thing? Probably not as the shoulder logos were sort of redundant in the first place. You have the big "BOSTON COLLEGE" lettering right in the middle of the jersey, why is why it probably isn't necessary to put logos in each corner. Yes, we get it you're BC. Let's keep it simplistic, the big name without the logo. Less clutter. I like it.

Secondly, the stripes on the jersey have changed. As you can see in the older version below, they have tightened up the stripes, made them thinne, and removed the large gold section from the bottom. For a team that plays fast, these new jerseys really emphasize the sleekness of the players. The changes remove a bit of the clunkiness the old jerseys seemed to have. 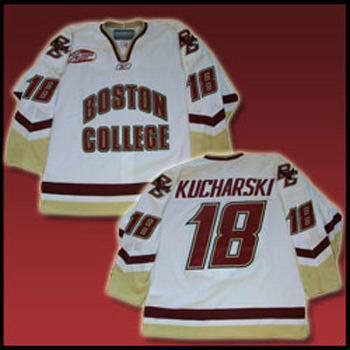 These uniforms also have the stain glass pattern that the football helmets had as well, but they seem less intrusive here. Just small patches of it on the elbows, which probably wouldn't be noticeable during a game.

All in all, the new hockey jerseys are a solid modern take on the BC classic. I know many of you out there probably loved the traditional BC jersey, but this isn't that much of a change. Is it? What do you think folks? Love it or hate it?