Yesterday, BC held their first ever open fall scrimmage as a special treat for students, faculty and season ticket holders. Boston College has never really made a big deal out of their preseason events so I wanted to go down to Alumni and check it out. I wasn't expecting many fans to show up, but was actually blown away when the stands were filled with 400-500 people. Not a bad showing for a weeks notice. The atmosphere was quiet, though concessions were open and BC cheerleaders were at the front gate to greet visitors into the stadium.

My first note was that I was impressed with the level of competition going on in the field. For their second day in pads, these guys were hitting each other and hard. Ball handlers were getting popped by the defense, and there was a lot of tussling after the whistle between the offensive and defensive line. Things got really heated when defensive lineman Conor O'Neal went after Nathan Richman after the play and had to be restrained by a teammate and removed by his coach. Definitely not a good moment, especially when half the crowd were kids who could hear everything they were saying. 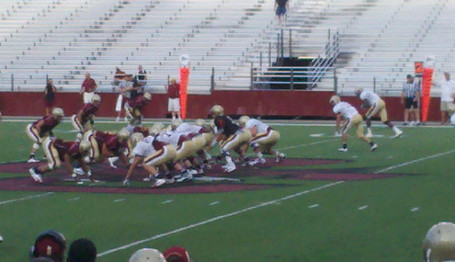 In terms of the new gameplan let me just say this: Boston College is going to have an offense. If you were worried that BC was not going to move the ball this season or score points, the scrimmage should have calmed most of those fears. Chase Rettig looked good and looked like a QB that will win games for BC. He made good decisions, moved around the pocket effectively and made a number of good medium and long throws including touchdown passes to Bobby Swiggert and Ifeanyi Momah. Dave Shinskie and Mike Marscovetra made appearances and looked very similar to last season. Take that for what it's worth.

Another encouraging sign was Montel Harris. At Friday's press conference Coach Frank Spaziani was fuzzy about the health of his running back telling reporters that he wouldn't know how healthy Harris was until he saw him in game and scrimmage situations. Watching Harris play during the scrimmage, you'd never know he had a knee injury. He looked quick, showed good acceleration, and took a few big hits on his runs. I don't think his health will be a problem to start the season. Andre Williams and Roland Finch also got some carries with the second team offense and were effective in moving the ball down field.

The offensive line looks like it has gelled, and again could be a strength for BC. Nathan Richman and John Wetzel took most of the snaps with the first team, and held the defense to one sack of Rettig. Offensive Coordinator Kevin Rogers threw a lot of misdirection plays at the defense, and the O Line did a great job of holding their blocks on those plays.The defensive line also did well, showing good patience against the run, and stuffing Harris and Williams on multiple occasions. The linebacking corp had a surprise star yesterday as Jake Sinkovec picked off Mike Marscovetra early in the scrimmage.

The scrimmage was a great event for fans, and honestly I had a lot of fun there. Hopefully Gene DeFilippo does more events like this in the future to reward season ticket holders because these are the kind of perks that show how much BC cares about the people who shell out money for their product.