Share All sharing options for: NCAA Football 12: Are These Boston College's 2011 Football Uniforms?

Even though the offseason seems to drag on and on, there is light at the end of the tunnel: EA's NCAA Football 12 is only ten days away from hitting store shelves. To build some buzz leading up to the release of EA's latest version of their popular college football series, EA has already opened up this year's TeamBuilder site. You can use your favorite team's logo, stadium, uniforms and roster to build your own custom team, so it gives us all a sneak preview as to how BC will look in the game.

We'll take a look at the Boston College roster and ratings between now and July 12, but for now we want to focus on the best part of using EA's TeamBuilder: catching a glimpse of BC's new rumored football unis.

As ATL pointed yesterday, it looks like Under Armour is planning an overhaul of the football uniforms for 2011, including the addition of a gold jersey and the return of maroon pants. Here is a comparison of the 2010 maroon jerseys vs. the rumored 2011 ones:

As you'll notice, looks like UA is ditching the Philadelphia Eagles-esque profile logo on the sleeves, and replacing these logos with some gold and white piping on the collar and sleeves. The BC logo at the V of the neck is also noticeably absent. The other big changes here is the stained glass detailing of the numbers and on the sleeves. The gold numbers are also much more readable, which is welcomed after last year's season opening uniform number disaster.

I'm a big, big fan of the much more simple, traditional look, but I'm not sold on the same stained glass detailing featured on the revamped hoops jerseys. Simple reasoning: the stained glass detailing will eventually go out of style and I'm sure UA will continue to tinker, which is a slippery slope. The more UA tinkering, the less chances BC has at maintaining a more traditional look. Also, the more tinkering, the greater the possibility that future BC uniforms might end up looking something like this:

Same stylistic changes with the maroon jerseys apply to the whites. The biggest improvement here is with the numbers. Look much, much better with the gold trim and cleaner definition.

Of course the biggest change is the addition of gold jerseys to the Eagles' wardrobe:

I really like the gold jerseys. It's a much better alternate top color than, say, black. That said, BC needs to choose its color combinations here wisely, less they end up wearing something that looks like this: 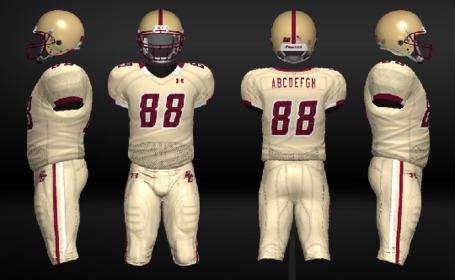 Moving to the pants, here are the subtle changes to the gold and white pants.

I'm a big fan of the thinner, more minimalist piping on the gold pants. The gold coloring between the maroon and white pipes also likely has the stained glass detailing which probably won't be all that noticeable from afar, which I also like. Same changes for the white pants.

The other big change to the uniforms is the return of the maroon pants.

The return of the maroon pants is probably my least favorite part of this uniform upgrade. I've always associated the maroon pants to early to mid 2000s "7-8 win ceiling" TOB football, which includes painful memories of WTF games like this one. The maroon pants aren't very traditional either, and these particular pants -- with the gold piping and stained glass detailing -- look more like ice hockey pants than they do football ones.

Finally, looks like there is no change to the Eagles lids, which I have to say ... thank god. The moment Under Armour tweaks BC's football helmet or offers up an alternate helmet is the day I will incessantly spam Kevin Plank's inbox with hate mail.

So what do you think of BC's rumored new look? Assuming the Eagles have some latitude on choosing jersey-pants combinations in 2011, which combinations look the best? Which ones are hideous?