Share All sharing options for: The BC Interruption Hate Index, Volume IV

Welcome to Volume IV of the BC Interruption Hate Index. Here are your week 1, week 2 and week 3 results.

We are going to up the ante a bit here. As part of the weekly Hate Index, we introduce the Hate Index Wall of Fame.

With that out of the way, on to the good stuff.

Last Week's Relegation: Villanova -- You had a good run, Wildcats. In the span of three weeks, you managed to survive and advance in the BC Interruption Hate Index and NOT get yourselves invited to Big East football. The rivalry between our two Catholic schools has cooled since BC's Big East defection, but make no mistake -- 'Nova is still looking up at BC when it comes to athletics and life. Some delusional Nova fans even think that the ACC is going to give them the call up. Pitt blog Cardiac Hill explains:

"So I've been scoping around some of the Nova blogs to try and get their take on this whole situation. Why is it that they feel the ACC is just going to call them up and say "COME ON DOWN!"? Other than the Philly market (Which, mind you, I don't feel that any college team can adequately deliver the Philly market), what do they offer? Football? Yea, Nova can't even get the Big East to accept them. The ACC is essentially the Big East in football terms, but a slightly better field product and less disarray between it's members. Basketball? Have Nova fans even heard of Duke? UNC? The ACC doesn't need Nova basketball to improve it's product."

Had to get that one last dig in. Even though you voted them off, 'Nova fans = still delusional and annoying. 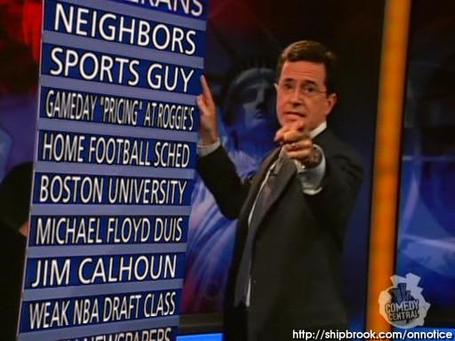 - Boston University (4 consecutive weeks) -- Hate so strong, it refuses to be confined to 140 characters or less. "I've been trying to think of one for BU but I hate so much about them I wouldn't know where to start or how to fit it in 140" (via @ACal6888).

- Jim Calhoun (4) -- Calhoun, who is 69 and has coached at UConn for 39 seasons, told The Connecticut Post that he has no timetable for retiring. "I don't have a timetable. I think it kind of just evolves. Whatever I decide to do, that's what I'm going to do." This quote was in reference to Calhoun's possible retirement and has nothing to do with NCAA recruiting violations, stolen laptops or players getting high.

- Neighbors (3) -- "Our kind has been here making noise at 4am longer than your house has existed. Respect our noble traditions" (via @davec00per). Noble traditions, indeed. The hoops blog Every Month March also notes that our neighbors want all BC students to live on campus but oppose the 10-year Master plan. Huh?

- Michael Floyd DUIs (4) -- Despite not being suspended by the school for his third incident involving alcohol, Irish coach Brian Kelly has stated that there's no guarantee that he will welcome Floyd back to the team. 1,025 yards receiving, 79 receptions and 12 touchdowns says he'll play.

- Gameday Pricing at Roggie's (2) -- "We're not blacked out EVERY night. We know you bump up your slice prices after dark. Jesus knows, too." (via @davec00per)

- 2011 BC home football schedule (4) -- Reader b0mberman doth protest, noting that real BC fans come to Alumni Stadium to watch the Eagles play, not the opponent. This is true, but it's also true that the AD knew that a season where BC hosts Duke, Wake Forest and N.C. State at home was coming for roughly six years now. Adding Northwestern (before Labor Day) and UMass to the schedule isn't going to move the needle in terms of home attendance.

- This Week's Addition: Bill Simmons (1) -- "Not only does he despise everything BC, but he's a little pipsqueek on par, I believe, with Jim Rome (c. the "Chris" Everett days). His writing, while generally good, has spawned too many copycats trying to write in his style. I can't tell you how many sports articles that I've read in the Heights which tried its hardest to read like a Simmons piece, but utterly crashed and burned. This man must be stopped before something really awful happens, like him getting his own Sirius/XM channel or his own TV show. I cringe everytime I have to hear his effeminate voice when he fills in on PTI. HATE HATE HATE HATE The Sports Guy, even if his Book of Basketball was funny at times. He also hates BC...so lets return the malevolence." (via reader scj)

As a reminder, please add your nominations for the vacated spot in the comments (and/or add better descriptions for the index members you truly despise). The best submission(s) each week will be featured in next week's Hate Index. Please hate responsibly.