Share All sharing options for: The BC Interruption Hate Index, Volume VII

The BC Interruption Hate Index keeps rolling along, now in its seventh installment. Here are your week 1, week 2, week 3, week 4, week 5 and week 6 results. Let's get right to it, shall we?

Last Week's Relegation: Gameday pricing at Roggie's -- You had a good run, Gameday pricing at Roggie's. We shall resume our hate for you when football season comes around again. For now, you get a pass for the remainder of the summer and we agree to pay your moderate prices for Molson Ice buckets, wings and pizza until football season kicks back up.

As an aside, BC Interruption Hate Index alum Michael Floyd won't face a suspension for his third alcohol-related incident if he is reinstated. Kelly will make the decision on whether to reinstate Floyd by evaluating his commitment to becoming a better person (read: catch more than 12 TD passes in 2011). 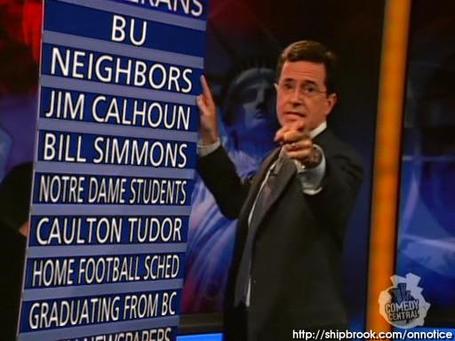 - Boston University (7 consecutive weeks) -- Highly touted 2014 hockey recruit Anthony DeAngelo has decommitted from Boston University, opting instead to play Canadian Major Juniors. DeAngelo reportedly confirmed his decision via Facebook. No word whether the prospect of losing to the Boston College Eagles for four years had anything to do with the decision. I would say DeAngelo made a wise choice, seeing as Parker probably would have kicked him off the team eventually for sneezing, or some other minor transgression.

- Neighbors (6) -- "How do the neighbors keep getting votes? Yes, the mods should be demolished and the land used for more high density housing and yes, BC students living off campus could be better behaved, college students or no. But the neighbors' idiocy and insane demands to do things their way and only their way with no room for compromise or discussion drives me up the wall." (via @tfots9)

- Jim Calhoun (7) -- Calhoun has done an incredible job of staying relevant this offseason. This week, it's telling CBS Sports that he now has just a 55 percent chance of returning next season to coach the Huskies. Basically, if he's not the coach by October 1 ... he'll retire. How's that for a douchy deadline? Honestly, I hope Calhoun does retire this year. Sure, he gets to go out on top coming off a National Championship victory. But he would also leave behind a massive shit storm in the form of lost scholarships due to poor academics, possible suspensions, substance abusers and laptop stealers.

- Bill Simmons (4) -- Only true haters hate on Matt Ryan: "The Todd Marinovich Award for 'Worst performance by a rookie QB': Put it this way, Matty Ice: When the Cards are jumping the snap for four quarters, then one of them goes on a radio show saying they jumped every snap count because you called every play on "one," then you probably should enroll in a "How to vary your snap counts" class at Steve DeBerg College this summer. Although I love the potential of a Boston College product not being able to count to two."

- Notre Dame Students (2) -- Sadly, the unfounded superiority of Notre Dame students finds itself in such venerable publications as US News & World Report. That's the only explanation I can come up with with this synopsis of the university from this year's Best National Universities rankings: Notre Dame: "The University of Notre Dame is a private, independent, Catholic institution in South Bend, Ind. Notre Dame's athletic teams, known as the Fighting Irish, play in the NCAA Division I and are particularly competitive on the football field." Highly competitive on the football field?" Did they write this description in the late 1980s and have been recycling it ever since?

- Caulton Tudor (3) -- Eagle in Brighton makes it clear that you are voting for the *least* deserving member of the Index in the weekly poll: "You're voting for "LEAST deserving," not "most." His narrow worldview and general ignorance of college football (the fallacy of "travel expenses," the clear financial benefit of the ACC>BE, teams' historical rivals) isn't funny as much as it is sad (coming from an employed sportswriter).

- 2011 BC home football schedule (7) -- The BC home football schedule holds on for the seventh straight week in a somewhat close vote. Can't wait for that 12:30 kickoff against Duke that gives us a full 30 extra minutes of tailgating. Oh, wait? We only get to tailgate the same amount of time? That's a damn shame, because alcohol consumption seems like the only way to make BC-Duke just a little more interesting.

- This Week's Addition: Graduating from Boston College (1) -- True, graduating from one of the best universities in the country is quite the life accomplishment. But leaving BC totally sucks. They give you a diploma -- sending you off into the "real world" -- and then force you to pack up and leave the dorms just a few hours later. In a crazed rush, you pack up all your stuff and head home without saying goodbye to half your friends, and then it takes you 2 hours to get from campus to Cleveland Circle because the traffic is so god-awful. Take it from someone who has been in the so-called real world for a few years now: never graduate. Go back to BC for your master's degree. Hold on for dear life as long as you possibly can.

I don't always dole out hate, but when I do, I prefer the BC Interruption Hate Index ...