Share All sharing options for: The BC Interruption Hate Index, Volume VI

Greetings to week six of the BC Interruption Hate Index. Here are your week 1, week 2, week 3, week 4 and week 5 results. Let's get right to it, shall we?

Last Week's Relegation: Michael Floyd DUIs -- You had a good run, Michael Floyd. And while there is all of zero chance that you will still be suspended by the time the Eagles hit up South Bend, I guy can dream. 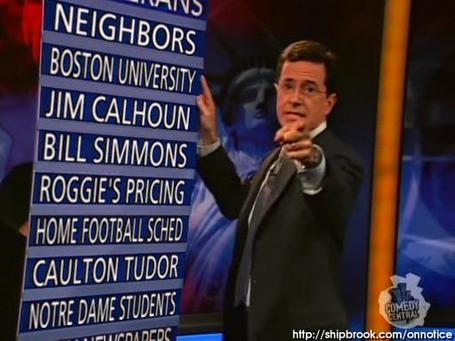 - Neighbors (5 consecutive weeks) -- "The BC Neighbors choose to live in a college town beause the rent is cheaper then hate the college...think they do that in Louisiana or Florida?" (via Taylor Wishman)

- Boston University (6) -- JohnQPublicSchool chimes in, "Not having gone to BC I don't really share the distaste for BU that most people on these boards do. Although, I currently work for BC and we had a seminar at BU yesterday. My buddy, a tea drinker, says to an old school BC guy, "Oh, I'm glad they have hot water," so he could make his tea. The old school guy goes "Well, we're at BU, what do you expect." The hate even trickles into academia.

- Jim Calhoun (6) -- "Former Connecticut basketball player Jamal Coombs-McDaniel is expected to face a judge for the first time on drug charges. The 6-foot-7 forward from Boston's Dorchester neighborhood was arrested April 21 on campus and charged with two misdemeanors, possession of marijuana and possession of drug paraphernalia." Best way to handle this situation is of course to get the kid to transfer citing him wanting more playing time.

- Bill Simmons (3) -- Lucky for you, there's no shortage of Simmons quotes rehashing the BC gambling scandal and lamenting the fact he didn't get into BC: "I haven't been to a casino in four months - every time I hear the Foxwoods Casino song these days, my right eye starts twitching. But since my mom was a Boston College grad and I've had a gambling problem since the womb, I'm always figuring out ways to bet on things." Oh man, I can't WAIT for Grantland!!

- Gameday "pricing" at Roggie's (4) -- My question is if you print out the non-gameday menu and bring it to Roggie's on gameday, do they have to honor the lower prices? Lowest price guaranteed!

- 2011 BC home football schedule (6) -- The more I analyze the 2011 football schedule, the less I like it. Sure, there are some quality road games on the sched, but the fact that BC plays two-thirds of their home games before October 2 really sucks for fans. It also seems to negate some of the home-field advantage BC enjoys when the calendar turns to late October and November and it gets colder.

- Caulton Tudor (2) -- When not inciting the "OMG guys! OMG!! East Carolina to the ACC!!" rumors, Tudor's next favorite topic is speculating on whether BC is entertaining thoughts of returning to the Big East: "But on the travel front, the Eagles have done a ton of heavy lifting during a rapidly decaying economy that's unlikely to fully rebound soon. With a small fan base, BC's football teams have been shipped to Idaho, Charlotte, Orlando and Nashville, where they've won three times and fell 16-14 to Vanderbilt last season in their only loss. At the same time, ACC schedules have done little to stoke emotion among BC fans, who understandably miss their games against old rivals, particularly Syracuse and Connecticut." (ed. note -- Yeah, we really miss UConn, Caulton.)

- This Week's Addition: Notre Dame students (1) -- "Im tired of having people from Notre Dame say that BC students are "ND rejects" when, in reality, almost everyone at BC didnt feel like wasting four years of their lives in South Bend, Indiana." (via D-Murph). Amen, bro. Amen.