Share All sharing options for: The BC Interruption Hate Index, Volume V

The Hate Index rolls on with its fifth installment. Here are your week 1, week 2, week 3 and week 4 results. 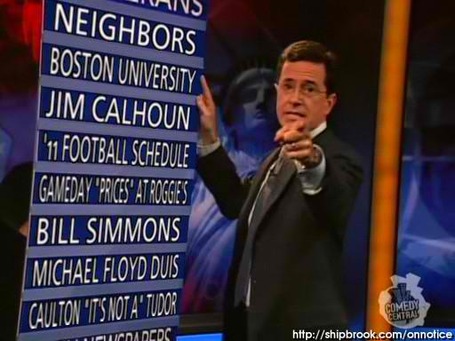 - Neighbors (4 consecutive weeks) -- Want to know how much Superfans dislike our "friendly" neighbors? Last week, they managed just 1 vote out of 110. Less than 1 percent of the vote? Yeah, we don't like you very much.

- Jim Calhoun (5) -- Calhoun still hasn't made up his mind on whether he will return for a 27th year at UConn. Lost Lettermen runs through a top list of candidates to take over the Huskies program. Job requirements include: being as arrogant as possible when answering questions about your salary as a state employee, regularly throwing assistant coaches under the bus and turning a blind eye to player academics, marijuana use and larceny. Inquire within.

- 2011 BC home football schedule (5) -- I can hardly contain my excitement for BC's 12:30 scheduled kickoff against Duke on the ACC Network. It's gonna be epic!

- Bill Simmons (2) -- Keep in mind this is a guy who once wrote "I've never had a distaste for BC. My Mom went there. I just like making BC jokes because they upset her. That's really the only reason. I love BC people - without them, everyone would want to move to Boston. They keep the numbers down."

- Michael Floyd DUIs (5) -- More from Mandel's Bowls, Polls and Tattered Souls. This from the chapter on Notre Dame: "The time has come for the people at Notre Dame to stop acting as if they, and their school, are special. They aren't. - Boston Globe, 2004"

- This Week's Addition: Caulton Tudor (1) -- The Charlotte Observer's Caulton Tudor is an unabashed Tobacco Road purist and will stop at nothing but the formation of an All Carolina Conference. Every few months, Tudor wakes from his college basketball slumber to file a 400-word column about how ECU should have been invited to join the ACC instead of BC or Miami. Here's an excerpt from one such post from 2009:

For interest, rivalry and territorial security, ECU, which plays Virginia Tech today at 7:30 p.m., would have been a much more exciting option for the ACC.

Imagine tonight's matchup as an ACC league game. Or how much fun it would be if the Pirates played N.C. State or North Carolina as a fellow member of the ACC."

But why stop there? Why not kick every ACC member out except North Carolina, Duke, Wake and N.C. State and invite East Carolina, Appalachian State, Charlotte, UNC-Wilmington, Gardner-Webb, UNC-Asheville, Western Carolina and NC-Central State to replace them? What better way to sure up the "territorial security" for the conference!

As a reminder, please add your nominations for the vacated spot in the comments (and/or add better descriptions for the index members you truly despise). The best submission(s) each week will be featured in next week's Hate Index. Please hate responsibly.