Share All sharing options for: The BC Interruption Hate Index, Volume III

Volume III of the BC Interruption Hate Index has arrived. Here are your week 1 and week 2 results.

Here are your updates.

Last Week's Relegation: Colorado College Hockey -- "Why dump on Colorado College continuously? Everyone knows we've played the underdog enough times, and you know what, I'd say let them have victory over a national championship team. We'll most likely be back next year. They probably won't." (via polarbearbrother). Aight, Colorado College. You are off the hook. See you again in hockey in, like, 10 years. 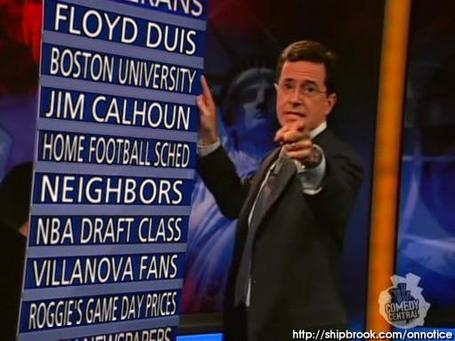 - Michael Floyd DUIs (3 consecutive weeks) -- It's already week 3 of the Hate Index and Michael Floyd still hasn't been kicked out of school.

- Boston University (3) -- Personal anecdote. When I was visiting schools in Boston, I first visited BC. Then made my way down the Green Line and visited BU. On the prospective students tour, the BU students pointed out the Green Line stops and talked about the MBTA. They said that the B Line T was $1.85 inbound and free outbound, because, the tour guide quipped, "who would want to pay to go to Boston College?" After graduating from BC, I can now tell you why: college football, superior hockey, quality academics and an actual campus, to name a few.

- Jim Calhoun (3) -- Calhoun and Kemba Walker set out to defend UConn's academic reputation, as the program is in danger of losing scholarships as a result of low APR scores. For his part, Walker has, in fact, read more than a book. "They want to bring us down. Regardless of what they say, I'm still graduating in three years, so that comment means absolutely nothing. I've read a lot of books." Unclear how many times he's counting One Fish, Two Fish, Red Fish, Blue Fish.

- Neighbors (2) -- Having a first-class University in your backyard doesn't give a boost or anything to the local economy. The least you could do is let us tailgate for an extra hour.

- A weak NBA Draft class (3) -- Jackson is up to number 27 in WalterFootball.com's latest Mock Draft, going to -- ugh -- New Jersey. And we all know what happened the last time the Nets drafted a first-rounder out of Boston College.

- Villanova fans (3) -- Villanova's PowerPoint work leaves something to be desired.

- This Week's Addition: Gameday Pricing at Roggie's (1) -- BCBro explains, "No need to jack up the cost of nachos because BC is playing an away game. Chaps my a**." HoyaEagle confirms, "Dead on. I don't go to Roggies any more because of it. Beerzillas for over $35!!!"

-- Honorable Mention: Eastern Clothing of Watertown, "Some people say it was Cooley and Coen's departure that led to a decline in Al's recruiting, others know the truth: the spotlight went right to his head." (via BCBro), Negoshian's Towing, the BC football game day experience (limited food options, tailgating, parking) (via CSOM_97)