Share All sharing options for: The BC Interruption Hate Index, Volume II

It's the second week of the BC Interruption Hate Index, which seems like it was a success. The Hate Index also seems very unbecoming Holy Week, but this is neither here nor there.

Here are your updates.

Last Week's Relegation: Tommy Amaker -- In a very close vote, we just don't have that much hate for that basketball coach across the river. I don't know. I guess beating BC three years in a row with a bunch of non-scholarship players isn't enough to engender hate in the heart of every Superfan. Has losing to Harvard in hoops become old hat? Fan apathy? What gives? 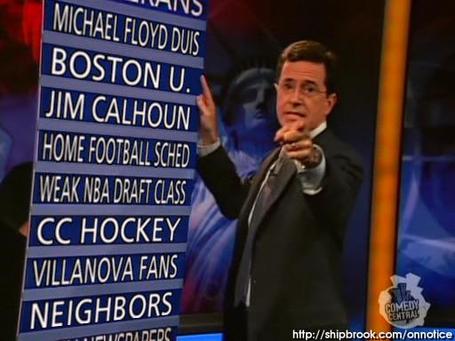 - Michael Floyd DUIs (2 consecutive weeks) -- This is our Hate Index proxy for all things Notre Dame -- their unfounded sense of superiority and entitlement, their special treatment by the BCS and their washed up football program. These guys haven't been relevant in football since Dr. Lou was roaming the sidelines in South Bend.

- Jim Calhoun (2) -- Calhoun, 68, will likely return to coach the Huskies next season. But there's a chance he walks away after this season. This, of course, will be Calhoun's way of avoiding the fallout when the NCAA vacates UConn's National Championship after they discover that Kemba Walker's scholarship was financed by proceeds from stolen laptops.

- 2011 BC home football schedule (2) -- Everyone is amped for BC's early home slate of Northwestern, Duke, UMass and Wake Forest, right? ... Right?? I would have guessed that BC had THE worst early season home schedule of any team in Division I-A. Turns out I was wrong. That distinction goes to our frenemies in Storrs, who open with Fordham on a Thursday, Iowa State on a Friday and Western Michigan.

- A weak NBA Draft class (2) -- Harrison Barnes, John Henson, Jared Sullinger ... you suck! Thanks for nothing.

- CC Hockey (2) -- "Damn, BC hockey lost to University of Colorado Boulder in the NCAA Tournament this year?" "Nah, they lost to Colorado College, some made-up school in Colorado Springs."

- Villanova fans (2) -- At this rate, UMass will be invited to Big East football before these guys. UMass may only be jumping to the MAC, but at least the Minutemen plan on playing in an actual football stadium.

- This Week's Addition: Brighton residents (1) -- "BC has been in Chestnut Hill on the line of Newton & Brighton for 100 years now, yet a few individuals who have moved into the area in the last 20 years complain about college students?! Who did you think would be strolling through Foster Street August-June every year? Furthermore, they complain about everything: BC can't house all of its students - they scream about crumby apartments and students wandering around the neighborhood. BC releases a master plan to put 100% of the students in housing - they complain. I put Brighton residents at the TOP of my hate list, right next to Charlie Weiss and the Cardinal Newman Society." (via Eaglephile)

-- Honorable Mention: The housing lottery ("I did nazi this coming"), Big East teams in the NCAA Tournament, SportsNation (that show is god awful), Wilkes-Barre/Scranton Penguins.