The BC Interruption Hate Index, Volume I

Share All sharing options for: The BC Interruption Hate Index, Volume I

[Ed. note -- blatantly "borrowing" this post idea from The Smoking Musket, perhaps the best thing to ever come from West Virginia University since, like, forever ...]

It's the offseason, and there's really not a whole lot out there on the horizon to look forward to for Superfans.

To help us beat the offseason blues, we present to you the inaugural BC Interruption Hate Index. What is the BCI hate index, you might ask? Well, this Index will be an evolving list of things in this world of college sports that BC fans can't stand. Everything from Michael Floyd DUIs to Colorado College (that's a real school?) hockey to a staple, Boston University.

Every Thursday over the offseason (we'll see if this thing has legs), we'll present you the weekly BC Interruption hate index. You then vote on the member of the index least deserving to stay in that week's index. The following week, we'll relegate the least deserving and add a new member to the index based on reader comments.

Make sense? It better. I mean, if WVU fans get it, so can you. 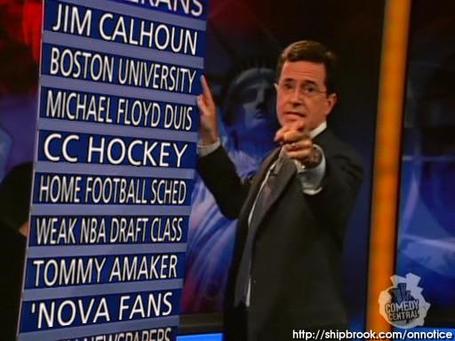 - Jim Calhoun. Not for winning the National Championship. Rather, for consistently throwing assistant coach under the bus, for all the violations, stolen laptops and profanity thrown around in postgame interviews. The litany of reasons could make for a month-long series of posts. Remember that time when good ol' Jimmy went ballistic on a reporter who asked him how much money he makes? You stay classy. Also, you might want to encourage your players to read more than A book during their entire collegiate career. Pathetic.

- Boston University. Everything about it. Its men's hockey team, its university, its stupid drop-kick dog mascot. True Eagles don't recognize the stops on the B line between Blandford Street and St. Paul Street. And all BC alum are smart enough to take the C or D lines, since they are much faster.

- Michael Floyd DUIs. God forbid Notre Dame take any disciplinary action on its star wide receiver after a recent DUI. It's not like this was the THIRD incident Floyd has had with alcohol in college or anything. The university has kicked players off teams for (far) lesser offenses. I'm all about second chances, but thirds and fourths? All because dude can catch a football.

- CC Hockey. Colorado College -- is that even a real school? We hate you for canceling our back-to-back National Championship victory parade, reinforcing the (otherwise unfounded) WCHA superiority complex, and then for not even having the decency to win the West Regional.

- 2011 BC home football schedule. Really, Gene? A home game before Labor Day? Four of six home games before October 2, when there's clearly other things to do in the fall when the weather is still nice. Your best home game on a Thursday night (great for students, horrible for alumni and the out-of-towners). UMass, Duke and Wake Forest -- needs no further explanation. You've known an ACC home sched of Duke, Wake, NCSU and FSU was coming well before BC ever played an ACC football game. And the best you could do to augment the home sched is Northwestern and UMass? The 2011 BC home football schedule is all sorts of fail, and for that, we hate you.

- A weak NBA Draft class. We hate you for keeping alive the chances that Reggie Jackson gets drafted. Reggie, if you are reading this ... PLEASE COME BACK TO SCHOOL!

- Tommy Amaker. What? Too good for an ACC job? I'm sure you think that you are going to stay at Harvard and beat BC for another three years but guess what? We probably won't agree to play you. Haha. Jokes on you. Have fun coaching those wicked smaht kids across the river and never getting your team to the NCAAs.

- Villanova fans. These guys think they can just join a BCS conference without actually putting up the money to commit to big time college football. That's the only rationale explanation I arrive at after reviewing 'Nova's plan (i.e. playing home games in a MLS soccer stadium that seats 18,500 and is 18+ miles from campus). When challenged by UCF or East Carolina fans, they tout the size of the Philadelphia TV market and make totally logical claims like a 17-team basketball league is far superior to an 18-team basketball league. News flash. 17? 18? Your conference is still too f--king big. The only redeeming quality of this plan is it probably expedites the Big East football/basketball split, which is way overdue.

NOTE: For new nominations, provide a reason for inclusion in next week's Hate Index. Also feel free to write better descriptions for the Index members above that you really, really hate (the best of which will be featured in next week's post).