Mid-Major Tournament Success No Guarantee Of Success At Next Level

Share All sharing options for: Mid-Major Tournament Success No Guarantee Of Success At Next Level

In SI's Luke Wynn's latest college hoops power rankings, he tracks the last 10 mid-major coaches that got hired by major programs the year after reaching (at least) the Sweet 16. I thought the below chart was interesting for two few different reasons. 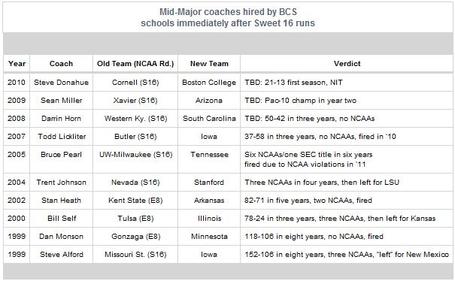 The first (and most obvious) is that Gene pulled the classic "Hire a Mid-Major Coach Who Finds Success In March" move a season ago with Steve Donahue. The verdict is certainly still out on how the Don will perform on the Heights.

But history hasn't been too kind to a majority of these coaches on the list. Three of the five four -- Steve Alford, Dan Monson and Stan Heath -- were busts, and only four of the ten coaches on the list got their new programs back to the Sweet 16. Iowa's actually pulled this move twice in less than 10 years, with both Alford and Lickliter winding up both being busts. Motion to rename this move "pulling a Hawkeye"?

The other reason I thought this chart was interested was that both N.C. State (Sidney Lowe) and Georgia Tech (Paul Hewitt) are in the market for a new head coach this year after parting ways with their former coaches. Richmond's Chris Mooney and VCU's Shaka Smart's stock has skyrocketed after getting their teams to this year's Sweet 16. It's likely both programs are making goo-goo eyes at these coaching candidates and we'll see one (or both?) of them in the ACC in short order. Mooney, you'll recall, interviewed for the BC job last year but ended up turning us down.

Who knows? You might see Mooney, Smart and Bruce Pearl coaching in the ACC in 2-3 years.

And while I'm not thrilled at the thought of seeing any of those coaches working in the ACC, just because they got their programs to the Sweet 16 doesn't mean they are guaranteed success at a major conference program.