Share All sharing options for: Will The NCAA Selection Committee's Recent Kindness To 10+ Loss Teams Continue?

"Before getting carried away with the discussion of how historically weak the NCAA men's basketball tournament field of 68 is looking, let's go deep in the annals of tournament history -- all the way back to 2007.

That year, 18 of the 34 at-large teams went into the tournament with at least 10 losses, and three more went in with nine.

That year also was the first in what has become a streak of four in which at least one team with at least 13 losses has made the tournament as an at-large selection. There was one such team in 2007, two in 2008 (including a 14-loss Arizona squad that tied the record for losses by an at-large entrant), three in 2009 and one last year." 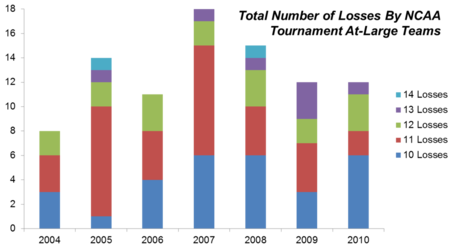 This is likely a trend that will continue in 2011 with an extremely weak bubble. As Berkowitz points out, four teams with 10+ losses -- Marquette (15-11), Michigan (16-11), Michigan State (14-11) and Tennessee (16-10) -- are in striking distance of one of the Tournament's final at-large berths. Five more, including BC, are almost there, having nine losses and not considered the favorite to win their conference tournament.

I don't think even the most optimistic Superfans expect BC to run the table and earn the ACC's auto bid to the tournament, so that makes at least 10 losses on the season. Fewer still expect us to win on Saturday against a Heels team that dropped a hundo on us at the beginning of the month. That makes 11 losses. But how many more losses can BC tack onto its resume before virtually eliminating us from at-large consideration? Your thoughts?