Future ACC Basketball Outlook: Will Donahue Ever Breakthrough In The ACC?

Share All sharing options for: Future ACC Basketball Outlook: Will Donahue Ever Breakthrough In The ACC?

During BC basketball's first season in the ACC, led by a roster of three future NBAers, the Eagles won 11 regular season games and came within a bucket of upsetting Duke for the ACC Championship. Ever since that inaugural ACC season of 2005-06, the general trend line for the Eagles has been negative -- both in terms of total conference wins and general fan excitement about the program.

Number of conference wins for BC since joining the conference: 11, 10, 4, 9, 6, 8 (the last number, a 2010-11 kenpom-approved projection). Once ranked in the top half of the conference in terms of number of ACC wins, BC has now fallen behind programs like Maryland, Florida State, Clemson and Virginia Tech in overall post-expansion conference winning percentage.

Superfans and alumni have responded at the gate, too. The average Conte Forum crowd size has declined in every season since we joined the ACC. These negative trends were a big reason why Al Skinner is no longer gainfully employed by the school.

The two groups can be distinguished by two very strongly correlated characteristics: consistent winning in the ACC and head coaching stability.

Take a look at the below charts. Of the ACC's "top-shelf," only one program -- Clemson -- has made a coaching change since the ACC expanded to 12 teams. The other five programs have all had the same coach for the last six years, and two of those coaches -- Mike Krzyzewski and Gary Williams -- have been at their current posts for 20+ years.

Contrast this with the "Busch Light" division, where two of the bottom six programs have already gone through two post-expansion coaching changes. A third, N.C. State, likely will be parting ways with its current coach at the end of the season. Finally, the other two non-BC programs in this group -- Georgia Tech and Miami -- probably wish the school would part ways with their current coaches. Probably not as much at Miami, where annual basketball expectations aren't that high, but certainly at Georgia Tech -- a program that has two Final Four appearances in its history and finished as the National runner-up not 10 years ago (2004).

Click charts to embiggen (this season's win totals as projected by kenpom). 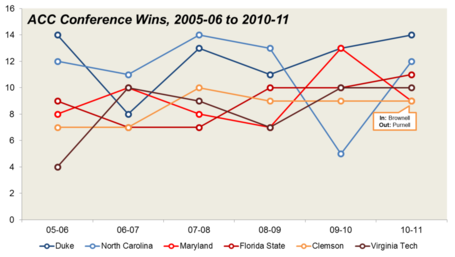 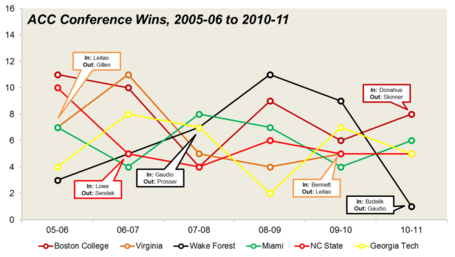 So my very long-winded set-up leads to today's discussion question: will Steve Donahue ever breakthrough in the ACC, and get BC back into the upper tiers of the conference?

Everyone who plays or watches BC play comes away thinking that this year's Boston College team is a well-coached one. But there are plenty of question marks about the Eagles' defense, and there will be a serious talent drain when we lose Trapani, Raji, Paris, Southern, and Dunn next season.

So what do you think? What's the long-term forecast for BC basketball? In Donahue you trust? Or is BC destined to be a middle-of-the-pack ACC hoops outfit for the next several seasons?