Boston College 6, Boston University 1: Hockey Throttles Terriers, All Is Right In The World

Share All sharing options for: Boston College 6, Boston University 1: Hockey Throttles Terriers, All Is Right In The World

So, Hockey East Online is either run by a BU grad, or they are seriously slacking. Somehow, there has been no video on their YouTube of BC's last two wins. But that's what I'm here for, baby birds...

Ah, that went down smooth. Nothing like a good, solid beatdown against your hated rival make things alright again. It couldn't have come at a better time. BC needed to get something going against the rat dogs. Getting swept in the season series by the Terriers as a top 5 team would be absolutely impossible to swallow.

Fortunately, BC absolutely torched BU 6-1 at Agganis. So much for BU being the "Best In Hockey East." (I'll wait for everyone's collective "WHAAAAAA???" Everyone all set? Good.)

Image of the night -- Jesus Loves Us. 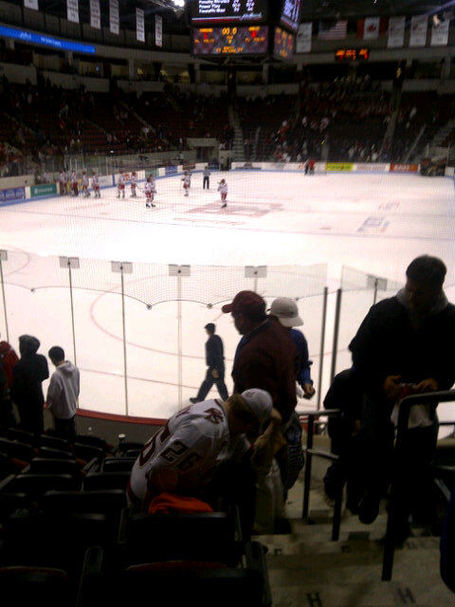 Let's take a look at some storylines:

1) Other than the one power play goal in a losing effort last night, BC still hasn't scored a meaningful power play goal in a long, long time. That's a big reason for their average record over the last few weeks. This is actually a reason for BC fans to be optimistic. I would not describe the power play as "struggling" despite the numbers, at least lately. We are generating chances. The goals will come. That will be a significant boost down the road.

2) This game was eerily similar to last night's game, in reverse. BU did have plenty of times where they carried play, in the second period in particular. Last night, BC outshot BU by an ungodly amount, and BU scored on their only shot of the period. Tonight, BU outshot us 22-8 in the second, and we scored four times on those 8 shots.

3) There is some insane parity in college hockey this year. #1 Merrimack and #2 Notre Dame were both swept this weekend by unranked Providence and Northeastern, respectively. In a season just begging for a team to declare themselves the top team, no one has grabbed it. BC could be that team if their power play can start up.

4) This is probably the biggest point: Boston College may have found their goalie tonight. Unless Milner is able to show Jerry York something in practice to suggest otherwise, Billett is our guy. He had 40 saves on 41 shots tonight and progressively allowed fewer and fewer rebounds. The kid looks ice-cold. He's made two huge starts for BC and has looked completely confident in net. Watch for this going forward.

What do you guys think? Does Milner deserve the benefit of the doubt, or do you think Billett needs to be given the bulk of the playing time right now?

Highlights aren't up yet online, but will be posted here as soon as they are available.