Share All sharing options for: The BC Interruption Hate Index, Volume XIII

Yes, we are back by popular demand ... a limited engagement of the BC Interruption Hate Index. Volume XIII. Boom!

Last Time Around's Relegation: ACC Bowl Lineup (2) -- Guess we don't have to worry about the ACC's crap-tastic bowl lineup when your program won't be playing in one this year. / drops mike, walks away

[Ed. note -- due to difficulties with the Hate Index On Notice board, the below is not updated. Ignore ACC Bowl Lineup and kindly replace with this week's entry. Thanks for your patience.] 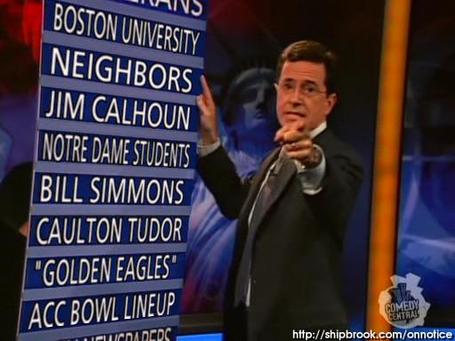 - Boston University (13 consecutive weeks) -- Very apropos given that the Boston College men's team is hosting Boston U. this Sunday. The BU men's team has basically stunk up the joint this season, compiling a 3-3-1 record overall and 2-2-1 in Hockey East. A record that includes a 7-1 drubbing at the hands of ... wait for it ... UMass-Lowell, a 5-4 loss to Holy Cross, a 5-3 loss at Providence and a 6-4 loss to St. Francis Xavier in the Terriers' exhibition game. One writer from the school's student newspaper recently wrote this abomination of an article attempting to take BC to task for GDF's role in ACC expansion. Because we really care what a school that dropped its football program over a dozen years ago thinks about college football conference realignment.

Basically the only thing this athletics program has done right in the last 12 months is hire away a Boston College basketball assistant coach, since your former coach bolted for an awful Penn State program. How's that working out for you, big guy?

- Neighbors (12) -- Town-gown flare ups have been kept to a minimum this football season. Perhaps that's because we suck and fewer and fewer people are showing up to the Heights on Saturdays? You know these guys are not-so-secretly rooting against the BC football program and hope that we will lose enough games such that the school will decide to drop the program down to the I-AA level so we can compete for National Titles against Villanova, Eastern Washington and Appalachian State in front of a crowd of hundreds.

- Jim Calhoun (13) -- It seems like not a week goes by without another UConn men's basketball player being investigated by the NCAA, getting suspended, stealing laptops or not reading books. This week, it's UConn freshman Ryan Boatright, whose eligibility was under review for reasons "not related to academics." What could the NCAA be investigating if not related to academics, you might ask? Apparently Boatright may have received extra benefit related to his AAU team. As always, quality work from the state of Connecticut's highest paid state employee.

- Notre Dame students (8) -- Forgive the Notre Dame football team for "letting a middling-ACC team hang around late in the fourth quarter," you guys ...

Letting a middling-ACC team hang around late into the fourth quarter is not the mark of a complete squad. Letting Pittsburgh (who lost to Kelly's former employer, Cincinnati, this weekend) push the game to its closing minutes is not the mark of a Notre Dame team ready to "Play Like A Champion." Coming out flat in the season-opener, and then again in the biggest game of the year two weeks ago, is not the mark of a focused, motivated team.

And they should do so handily. Dominate the teams you are expected to beat. That is what good football teams do.

- UConn (2) -- My, have things changed since the last time we published a Hate Index. During that time, the ACC, Syracuse and Pittsburgh basically pantsed the University by bolting the Big East for the ACC. Then the whining started in earnest. First it was school president Susan Herbst "aggressively pursuing membership in the ACC." Next up were UConn coaches Jim Calhoun (see above) and Paul Pasqualoni stumping to gain admittance into the ACC. Even the governor of Connecticut weighted in on the matter. We've heard all the excuses ... the current administrators were not involved in the 2003 lawsuit, BC-UConn is the next Duke-North Carolina, blocking UConn is a very un-Jesuit like thing to do. Wasted breath. Maybe as a school you should be making weekly trips to South Bend to coax Notre Dame out of football independence instead of leaking your frustrations with the Big East to every sympathetic sports writer in America? #humblesuggestion

- Bill Simmons (10) -- It was only a matter of time before B.S. took a pot shot at BC over at Grantland: "My buddy Gus has a college friend named John Oaks - this was the second gambling rule anyone ever passed along to me, right after, "Don't ever bet on B.C., you never know when they're shaving points."

- This Week's Addition: Spazball (1) -- A simple, pithy label given to Frank Spaziani's offensive philosophy, which includes such tenets as:

-- Run, Run, Pass, Punt offensive sets
-- Calling back-to-back draw plays on 2nd and 3rd and 21, hoping to catch the ACC's top ranked run defense off guard
-- Running 11 run plays to only 2 passes in an offensive drive that ate up over 7 minutes of the fourth quarter ... while down 31
-- Punting the ball from the FSU 43 ... again, down 31 points late in the fourth quarter
-- Your two minute drill consists of Rettig rush for -2 yards, Rettig rush for -2 yards, end of half