N.C. State and former Boston College head coach Tom O'Brien has been the subject of not one but TWO different internet crazes this season. First it was the #notoriousTOB Twitter hash tag, which gave us such gems as:

TOBing is the act of posing like Tom O'Brien, which according to BTP means: "Cross your arms and quietly survey that which lies before you. And if there's a little America on your hat, well, all the better." What started as a simple concept has drawn some pretty serious attention, including writeup from Dr. Saturday and the Raleigh News & Observer:

"It started out, as most Internet memes do these days, as a one-off joke on Twitter, a parody of the short-lived "Tebowing" fad, but TOBing appears to have some legs.

A website - tob-ing.tumblr.com - is cataloging pictures of O'Brien in his trademark stance as well as fans' imitations of it - including a strikingly dramatic shot of a Wolfpack fan TOBing on a Tallahassee, Fla., dance floor before the Florida State game, blurred bodies swirling around him in the near-dark.

It's an homage to the coach, but it's also gently mocking, a subtle reference to some fans' main complaint about O'Brien: He doesn't show enough emotion on the sideline."

If there's one thing we enjoy, it's a gentle mocking of TOB. Should you have some good ol' timey photos of Tom O'Brien TOB-ing on the Heights, be sure to submit them to the TOBing Tumblr site. 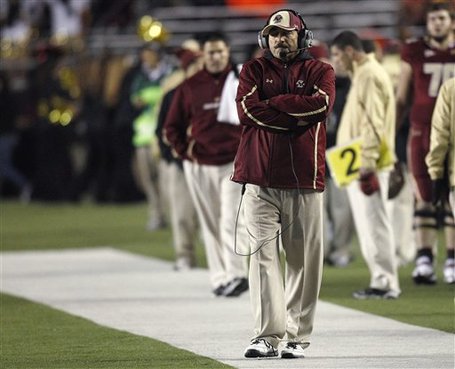 In addition, we can only encourage a similarly entrepreneurial Boston College student or fan to start up the sister Tumblr site, SPAZzing. We've gotten a number of different looks from Spaz this season, but I'd say a good majority of them look very similar to this: 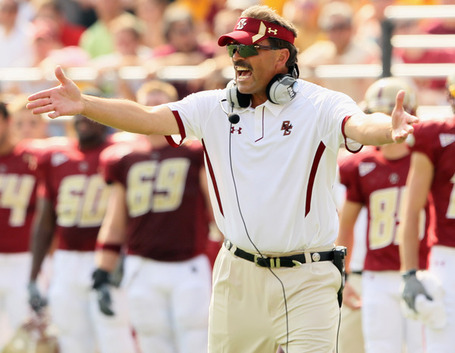 Spread your arms wide in protest of a bad call and/or your "anemic" offense. And if you do it with a sweet stache, well, all the better.