Share All sharing options for: Boston College Hockey Takes A 3-2 Thriller At The Yale Whale

BC Hockey sure knows how to give its fans heart palpitations. After a wide-open game that featured 72 shots, BC stormed back from being down 2-0 to defeat Yale on the road, 3-2.

The game was an absolute thriller. It was a battle between two high-flying teams that were able to let loose and play to their strengths. The result was one of the best games of the year.

After the jump, an as-it-happened breakdown of the game, from the chicken scratch of my notebook, starting from the minute I arrived in New Haven.

I was fortunate enough to attend this game. I live in Connecticut, and grew up in a Yale family, so I've been looking forward to this one for... well, years. Tickets were sold out well over a month in advance, and BC blew through their allotment extremely quickly. Fortunately, I was still able to get in.

3:01pm - Parking meters? Really? I ask a New Havenite if you have to pay on a Saturday. "Nahhh, no way, naht ahn'a Satahday!" Thanks, chief.

3:02pm - Had a pretty good parking spot, just half a block from the arena. And ohhh, she's a beauty: 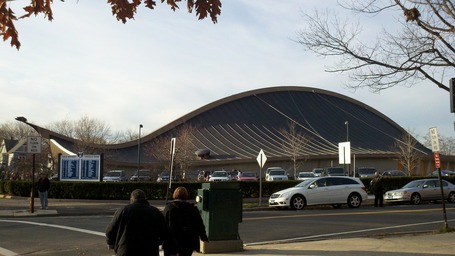 Yale has a very unique arena, as you can see. They don't call it "The Yale Whale" just for the heck of it. Its design is bizarre, but has its benefits... mainly, it makes the arena acoustically loud as all get-out.

@Salzano14: This arena is everything that is right about college hockey. What a gorgeous old barn. #yale

3:15pm - Took a stroll around the rink when I got in. Standing room is filling up pretty quickly... better get a spot quick.

3:16pm - Snagged one on the blue line where BC shoots at twice. Pro: Perfect view. Con: I'm standing on a ridiculous slope. The concourse down the length of the arena is shaped a lot like the arena itself - you walk up to get toward the press boxes and walk back down to get to the other end. Weird. Anyway... I've stood here for like 30 seconds and already my back is killing me. I think I'm getting old.

@Salzano14: There are a TON of BC fans here at Yale. Holy smokes...

3:40pm - Just found out that Billett is starting. Whoa. Making his college debut against a top 10 team... talk about being thrown into the fire. 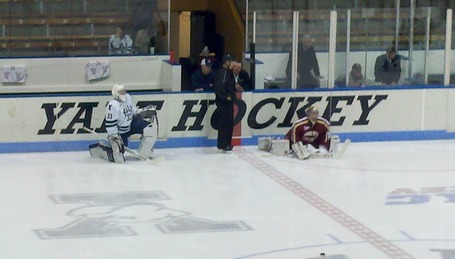 3:59pm - So, Yale pumps up their crowd with a little Jock Jams "Let's Get Ready To Rumble" ... alright. Can't hate on a classic, I guess. Wonder if UNH stole that, too. Probably.

Game Clock - 20:00, Period 1 - It is COLD in here. I'm talking freezing cold. The kind of cold that would make the ice not melt. I kind of forgot what that was like, to be honest.

18:25 - Pass to Gaudreau just out of his reach. He would have been off and running on a clean break.

18:05 - This game has been all BC so far. Billett has looked confident and collected on the few Yale chances.

16:20 - Gaudreau just had his stick slashed out of his hands, no call. Yale proceeds to have a huge chance, but Billett stood tall...

10:10 - BC seems to be carrying play, but Yale is definitely getting their chances in this game.

@Salzano14: Hoo boy. We're in for a good one tonight. Yale & BC both getting a TON of chances. Billett looks fine, though needs to clean up the rebounds

6:04 - Kreider just made some crazy stickwork to get through about 3 Yale defenders and walk in alone on the Yale goalie... flipped it over the crossbar though.

0:00 - BC really upped the pressure toward the end of the period but nothing into the net. Playing really well in general. Both of these teams like to skate... it makes for quite an exciting game.

@Salzano14: This looks exactly like the regional final in Worcester, except we haven't seen 3 Yale goalies yet. Fast-paced game.

20:00, Period 2 - This place is loud. The concourse is pretty much surrounded by all concrete, and all the sound seems to reflect right back out to the seats. It's a pretty small place but they definitely filled it up. Standing room is stacked two and three people deep all the way around the place. Impressive.

19:16 - BC hits post! Okay, so we're getting closer to putting it in the net. That's encouraging.

17:56 - Not sure what to make of this one... Yale just came in on a two on one, and somehow BC's defender got cross-checked into Yale's net. Just an asinine penalty to take there. I'm not even sure how it happened.

15:56 - Similar story on that BC power play to the first couple we had. Some decent possession but no finishing. At least we have some very good puck movement happening.

10:20 - BC has been doing a much better job lately of getting the puck out of its own end. It seems like starting with the BU game, we've been struggling in that end. We look much more like BC in this game... a couple quick passes to open up a lane for the outlet. I like it.

2-0 Yale, 9:58 - Well, that was lame. Yale scored pretty much the exact same way they scored their first. They came in on a two on one, shot, and Billett left a pretty juicy rebound. This one only required a tap in from short range on an open net. Still, I'm not too concerned about Billett. He's looked quite good, and the rebounds will get cleaned up with playing time.

8:06 - Okay, frustration is starting to build here. We are definitely carrying play for significant chunks of this game but just can't seem to finish. Is this going to be one of those "we ran into a hot goalie" games? I sure hope not. Yale's goalie has been playing extremely well.

4:33 - Oh, that's a bad holding call. Not sure that one should have been called on Mullane. But... two guys in the box? What? Alber got called for roughing. I didn't see it, but you have to figure it was legit to warrant giving Yale a full two minutes of 5 on 3... This is not going to be fun.

3:37 - Yale calls its timeout. They really must want to put the nail in the coffin on this one. 2-0 is the most dangerous lead in hockey...

2:33 - Wow. What a penalty kill for BC. Yale possessed the puck in the offensive zone for the full two minutes. It wasn't really bad defense that led to it, just kind of the result of having the other team with two more guys than you. Really need to give BC credit. I don't think Yale had a single good lane to shoot through. Just a phenominal job of blocking shooting lanes with the body. This could be a turning point in the game.

0:00 - Wow, that is as big a momentum shift as you will ever see. That last four minutes changed the entire hockey game. It may be 2-1 Yale, but it almost feels like this is BC's game to lose.

@Salzano14: That goal sure felt like it's going to open the floodgates. Yale's goalie's been standing on his head & he justttt let one squeak by 5 hole.

@Salzano14: @joegrav It's so cold in here my pen keeps not working.

18:10 - I just noticed, there's no Yale student section at this game. Not sure how I just noticed that, but that's kind of lame. They're a trip.

16:20 - Wow. An even dumber cross-check on Yale after the whistle in their own offensive end. Yikes.

14:15 - For as well as BC has played in this game, they have had some bad turnovers behind their own net. They have directly resulted in about 80% of Yale's best chances. I would like it if they stopped that. Please and thank you.

11:35 - As an aside... When Gaudreau sets up behind the net, I often feel like preemptively celebrating a goal.

@Salzano14: This game is INSANITY.

3:15 - Bad hooking call here on BC I thought. You can't call that at this point in the game. It was called by the ref 150 feet away from the play. Come on now. Having said that... I wouldn't give up just yet. BC just might pull off a shortie on this. You know they'll be pressing.

1:00 - I tell you what... this is the kind of game that, if there was a shootout, it would be an insult to the game of hockey. If this game ends in a tie, it will have been well worth it.

3-2 Boston College, 0:38.8 - GET OUT OF HERE! Kreider puts home a feed from Steve Whitney and in the blink of an eye, this one has turned into a classic for BC fans! And oh my, the Yale fans are not pleased. As soon as the puck hit twine, Yale fans started streaming for the exits. Have to feel for them after what we went through after last week, but we're going to enjoy this one!

This was a big win for BC. We consistently open the season against some tough opponents. Regardless of how many fans feel about the ECAC, Yale came into this game as #8 in the country. Playing these tough out of conference games prepares BC for the postseason. After the game, Coach York briefly addressed BC's scheduling philosophy:

We like to schedule our non-conference opponents, teams who are top clubs... We think with the way Yale's been playing, that's a great opponent for us. It makes you better. You may not win them, but it makes you better because they're going to push you.

Coach York doesn't feel that it's worth it to collect wins against lower-level opponents just to stack your record (#1 Merrimack says hello).

Doesn't look like Hockey East Online is getting it done... Do I have to do everything around here??

Jerry York had a pretty good quote to sum this one up:

To score shorthanded to tie it, and Kreider with the winner... it's a pretty excited bus we have going home.