It's hard to imagine that tomorrow is the last home game of the football season. But at this point, it's kind of for the best right? I don't think my sanity and blood pressure could take another week of watching Spaz poop all over Alumni Stadium. But on the other hand, I love BC football so much and I don't want to wait until next September to root on my favorite team again. It's a tough situation to be in. Irregardless of my personal feelings, tomorrow is it, and this game DOES mean something to the Eagles. At this point wouldn't it be great to play the role of spoiler and keep N.C. State out of a bowl game?

Is this the last home game for Luke Kuechly? Hold on while I throw up all over myself. I can't believe this, he has had such a magnificent career at BC yet has been straddled with some less than stellar teams. I always hoped he would have a season like Mark Herzlich had in 2008, where he took a "meh" team and took the entire team on his back all the way to the ACC Championship Game. But it never happened for Kuechly. And now it looks like Kuechly could be going pro, and at this point who could blame him? Get that money Kuechs. We love you. I love you.

Will Nathan Richman and Andre Williams actually get some playing time? If BC starts to tank again, what will be the most creative chant BC fans will make about Spaz? When will be the next time we will see Alumni Stadium with more than 30,000 people in it?

I came to BCI back in May, and the last six months have been a blast. But many of you don't know that I have never met any of the BCI guys before. I met Conrad last weekend at the AIC scrimmage last weekend, but never Brian. Until this weekend. Now two of the most dastardly BC fans finally meet face to face. Beer, football, and tailgating. If this isn't a Triumph, I don't know what is. Lookout Boston College, we are coming.

Liquor To Help Dull The Pain- The Flabongo 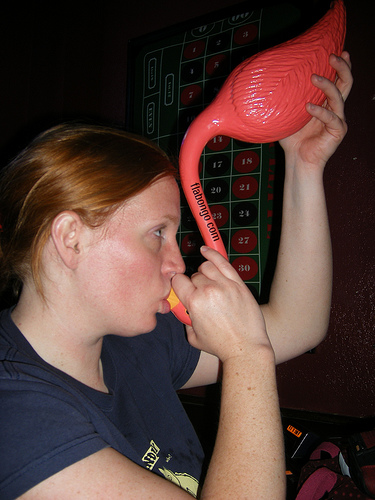 This isn't necessarily a specific drink, but more of a way to consume any alcohol in a VERY fast way. Come on, who hasn't seen a pink flamingo lawn ornament and said to themselves "Wow, it would be awesome to shotgun a beer through that!" Well, look no further, the flabongo has got you covered. Pour the beer in the flamingo's belly, suck faces with the beak, let go of the trigger and boom the beer is gone.

The flabongo has been a staple at my tailgate for years, and everyone at our tailgate has done it. From BC seniors, to parents, to grandparents. It's a cold blast of brilliance, and will be a story you can tell your grandchildren.

If BC loses again tomorrow, you are going to need to get booze into you at an extraordinarily fast rate. The flabongo usually does the trick.

Reading from the Fire-Spaz-o-meter 3000: OVERLOAD. Excuses, defeatist mentality, screwing around with the quarterbacks, embarrassing BC on national television. Honestly, at this point how many brownie point can loyalty and stability buy Spaz? 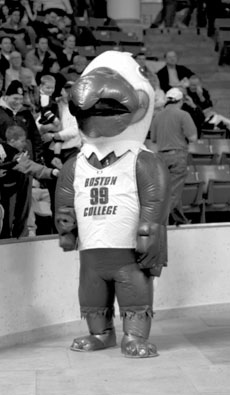 HI PEEPLES! BAWDWIN JR. IS SOO EXCITED TO WELCOM BAK TOMMY! BAK IN 2004 TOMMY CREETED ME FROM SOME PLASTIQ, GINGER MAGIC AND A VHS COPEE OF FOREST GUMP. TOMMY TOLD ME MY PERPOSE WUZ TO DISTRACT THE FANS FRUM HIS CALL OF BUBBLE SCREENS ON THURD AN LONG, AND WHEN BAWSTIN COLEGE WAS LOSING TO BAD TEEMS. IM GOING TO GIVE TOMMY A BIGGIE HUG!

THIS WILL BEE A BIG WEAK FOR POOP FINCH. I KNOWS POOP HAS HAD TROUBLES WITH THE DROPPED BALLS, BUT HE WILL BE OKS. TOMMY DROPPED MEE ON MY HEAD MANY TIMEZ AND I COMES OUT OKAY RITE? BAWDWIN'S FINAL SCORE WILLS BE BCEE 4 TOMMY 2.

Enough is enough. Call it burnt out, call it lacking faith, whatever it is I just don't see BC winning another game this season. Their offensive line is a complete mess, they still look completely flat on offense and Spaz has completely checked out on this season. TOB needs this game, and the Wolfpack are going to be ready. Be prepared Eagles fans, Saturday could get REAL ugly.

Superfan Thermometer: How are you all feeling about this weekend's game against NC State? Think the Eagles have a trick left up their sleeve or will TOB leave the Heights with a big win for his program? Leave your thoughts about tomorrow's game in the comments. GO EAGLES