Toledo Out At Tulane: Another Head Coach Fired Midseason

Share All sharing options for: Toledo Out At Tulane: Another Head Coach Fired Midseason

On Tuesday, Tulane football parted ways with head coach Bob Toledo. Toledo was hired before the 2007 to coach the Green Wave, after a 4-year hiatus from coaching. In 4 1/2 seasons at Tulane, Toledo went a very Tulane-like 15-40.

Which brings us to Boston College's Frank Spaziani, who through 2 1/2 seasons as the program's head coach (no interim label), is 16-16 overall and 9-10 in ACC play, with the potential of his record getting much worse before the season is out.

I thought this would be as good a time as any to look back at the Spaziani hire to see what GDF said in the school's official press release. Just how is Spaz measuring up to the goals DeFilippo set for him / the platitudes given to the long-time BC defensive coordinator.

"Last week, when we began a search for a new head football coach, we wanted someone with outstanding coaching credentials and a proven record of leadership."

Read: 1-0 as a head football coach prior to taking the head job on the Heights.

"We wanted someone who would continue our tradition of recruiting top quality student-athletes who fit with our academic mission, who will represent our University with class and leave Boston College with a degree."

Do players dismissed from the team for breaking unspecified team rules violations count against our graduation rate? Please say no.

"We wanted someone who could hit the ground running, to make this a great recruiting class and next year's even better."

"We wanted someone who would be respected by our alumni, fans, staff, the news media, and most importantly, our student-athletes." 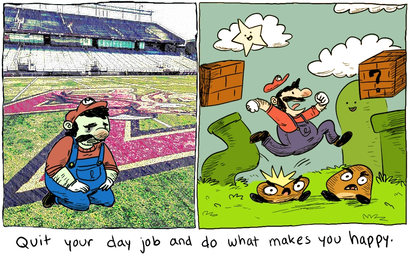 "And we wanted to find someone who really wanted to be at Boston College, more than anywhere else. We found the perfect person for that job right here on our staff. That person is Frank Spaziani."

Well, at least you got one of your criteria right, Gene.

In short, when you've lost the support of the national media, fans, alumni, students and even the blogs, and failed to live up to most of the criteria laid down at the time of your hire, it's probably time to admit you made a mistake and make a change. I get that Spaz won't be fired midseason, but will he soon be joining Locksley, Stoops and Toledo in the bread line?