The Nevada Wolf Pack football program has had an interesting season, having already won a program best 12 games. I thought it would be interesting to chart the 'Pack's rise through the college football BlogPoll, and see how it compares to our ballots. I wanted to see whether a blog repping an East coast program exhibited that pesky East coast bias when it came to ranking a 12-1 WAC program.

Nevada came onto our radar (and our blogpoll ballot) after their 52-31 win over Cal in week 4 and received a few votes, though not enough to crack our top 25. That was the same week that UNR first showed up in the blogpoll in the #24 slot. Week 5 was more of the same (blogpoll > our ballot) before we caught up in week 6, after Nevada's 44-26 win over in-state rival UNLV.

Starting in week 7, our ballot actually ranked Nevada higher than the poll at large. That trend continued through Nevada's week 11 win at Idaho. After that though, it was three weeks where the blogpoll had Nevada ranked higher than our ballot. We finally caught up with the poll at large in the poll's final regular season ballot, ranking the Pack at 13.

Nevada ranked #13? Too high? Too low? Where do you think Nevada finishes the season after the bowl game? With a win, does the Pack sneak into the Top 10? Or will a loss to BC send them tumbling down the rankings? Your thoughts? 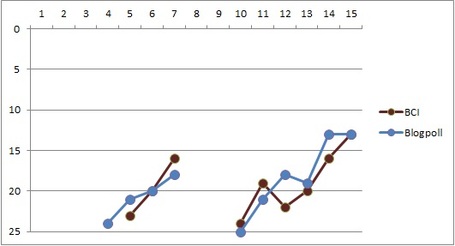