At the start of the 2007 season, we decided to print up some "Ryan for Heisman" t-shirts and wear them to all the football games we attended that season. The whole thing seemed a bit silly; that is, until the Eagles started the season 8-0 and BC's senior quarterback was working on a legitimate Heisman resume. 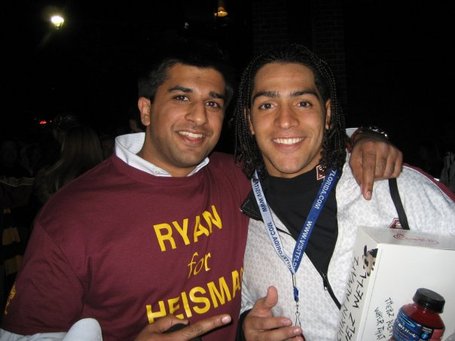 After a two-season hiatus, we are looking for a new t-shirt design for the 2010 football season. We are looking for a design that might sound somewhat appealing or interesting enough to plunk down some hard-earned cash on. Obviously we can't do anything too copyright-y and we have to tread lightly on the use of the school's name and the names of players. So it's best to try to incorporate your favorite obscure quotation or random reference.

Got ideas for a BC football t-shirt design? Leave them in the comments section. Just a slogan or text for the shirt will suffice, but extra points will be awarded if you go the extra mile and actually mock up the t-shirt design.

We'll be taking suggestions through early next week, then we'll pick a Top 5 and put it to a reader vote. We will award the creator of the winning design with two free t-shirts. So put on your creative hats and give it your best shot.

* In no way is B-Rob endorsing Ryan for Heisman, Chick-Fil-A or Powerade. Well, maybe Chick-Fil-A.