Share All sharing options for: Reviewing The 2009 Preseason Predictions

Brian: Before we start in on previewing the upcoming football season, I thought we’d look back at our preseason projections from a year ago. On the whole, we acquitted ourselves pretty well. You nailed BC’s final regular season record of 8-4 while I correctly predicted 11 of 12 games.

Here are our projections and actuals from 2009: 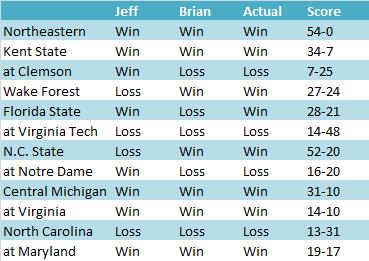 Not a bad day’s work, right? Your thoughts?

Jeff: My 8-4 prediction was right on the money but you seemed to be better at predicting which games we would win and lose, I just got the overall right. Either way, well done by both of us in what did turn out to be a fairly predictable season for our team if you were someone taking the somewhat realistic but optimistic look at our season this time last year.

Thoughts on how last year’s predictions stacked up to the final results?

Jeff: That's one of the rare times that we'll both predict Florida State to finish ahead of Boston College in the preseason and both be wrong. We were both higher on the Russell Wilson lead Wolfpack than we should've been but fortunately not as high as many were at this time last year.

Jeff: I was really wrong with North Carolina. Early in the season it looked like my prediction had a chance but then that fell through when UNC beat BC and others, but still did not live up to much of the preseason talk. We were both high on Miami this time last year and really the only reason I didn't pick them over Virginia Tech was because I felt like the Hokies needed to be knocked off first before I would put them any lower on that list.

Brian: Anything you learned from last year that you plan on using in this year's predictions?

Jeff: It is only one season that we're looking at here but it truly does look like last 5 seasons win percentage is the biggest indicator of future success and trying to mix things up much beyond that is just like throwing darts at a board with teams' names on it.