Here are the results of our recent Predict the Boston College Football Season exercise. Thanks to the 65 responses we got for this first go-round.

At a high level, here is the average confident rating for each of the 12 Eagles regular season games: 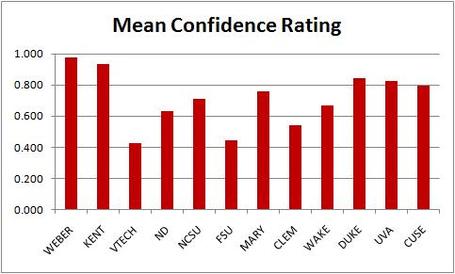 Or here is the data in raw form:

Not many surprises with the mean confidence ratings. On average, Eagles fans expect this team to go 10-2 in the regular season, losing only to Virginia Tech at home and Florida State on the road. This would also be an amazing regular season for Eagles ... and probably won't happen. But hey, it's still June.

Let's take a look at the variability in responses: 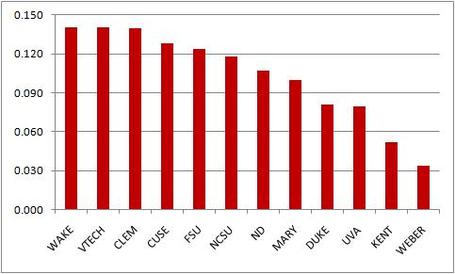 Using the standard deviation as a measure of the variability/uncertainty for the set of confidence rankings, we can get a sense of where the greatest disagreement or uncertainty is in the Eagles schedule. This is where things seem to get interesting.

Wake Forest (1.41) edges out Virginia Tech (1.40) as the game with the highest standard deviation. This is most likely due to the fact that the game is in Winston-Salem and we really aren't sure what this year's Wake Forest team will look like without QB Riley Skinner at the helm. Predictably, the six games that there was the most agreement about were all non-bowl teams a year ago and combined for a record of 21-39 (Weber State excluded).

Here's a look at the statistics for each game.

Thoughts: Understandably, Eagles' fans know next to nothing about the Weber State Wildcats of Ogden, Utah. But an average of 0.974 and a mode/max of 1.000 is probably too high here. This team played two teams from the higher division last season on the road and nearly knocked both of them off - at 29-22 loss at Wyoming and a 24-23 loss at Colorado State. BC is clearly a better program than both Wyoming and Colorado State, and will emotionally fired up with the return of Mark Herzlich, but BC probably wins this game less than 97.5 times out of 100.

Thoughts: Kent State will be improved from last season, especially with the return of running back Eugene Jarvis after gaining a sixth year of eligibility. Jarvis lacerated his kidney in the game against BC last season. An average of 0.932 is probably about right. Maybe a tad bit too optimistic. Along with the Weber State game, there was disagreement/uncertainty here.

Thoughts: Given the thrashing BC received in Blacksburg last season, 0.427 seems a bit too optimistic. The Hokies return seven starters on offense, and also return RB Darren Evans who was lost last season to a torn ACL. I guess there are few bright spots regarding this game. 1) Bud Foster says this might be his biggest rebuilding job yet on defense, as the Hokies return only 3 starters. 2) it's at home, where BC has won both meetings against the Hokies since we joined the conference. 3) BC will be coming off their only bye week of the season. A confidence rating in the mid- to high- 3s is probably more realistic. Also, a max of 0.925 ... huh?

Thoughts: A 0.635 average actually sounds about right, but you never know what you're going to get with the Irish coming to town. It seems like Brian Kelly has a pretty big rebuilding project on his hands in South Bend, but again, you never know.

Thoughts: While I'm not expecting too much (yet again) out of Tom O'Brien's squad, I think an average of 0.713 is pretty high for the Eagles first road game of the season. BC was miserable in road/neutral games last season (2-4), eeking out their only two wins away from the Heights against hapless Virginia and Maryland. BC caught a few breaks and were lucky to escape Raleigh with a win two years ago. This game is probably closer to 0.600 or 0.500.

Thoughts: A fair amount of uncertainty about this game which seems to reflect the nature of the opponent. Jimbo Fisher takes over for legend Bobby Bowden and while he has a lot of the key pieces returning to one of the best offenses in the ACC last season, the FSU defense was ranked dead last a year ago. New coordinator Mark Stoops should help things out, but I think the 'Noles D still has a long way to go. BC is 2-0 in Tallahassee as a member of the ACC, but 0.445 is too high for playing the preseason favorite to win the division on the road.

Thoughts: The mode of 0.700 here sounds about right. The Terps are still a young team coached by likely a lame duck head coach in Friedgen, especially now that AD Debbie Yow has pulled a TOB and bolted to N.C. State.

Thoughts: A lot of uncertainly here as well, as indicated by a max of 1.000 and a min of 0.200. The mean/mode are probably accurate though given BC is at home. Clemson returns one of the strongest defenses in the conference next season. However, the big question mark is whether QB Kyle Parker will play after being drafted by the Rockies, or whether this season will mark the beginning of the Tahj Boyd era at Clemson. This game is almost impossible to predict with that question left unanswered.

Thoughts: Wake has a lot of question marks on offense, the biggest of which is who will replace four-year starter Riley Skinner at quarterback. BC has played some of the strangest, wildest games in recent memory against Wake though, and until Mark Herzlich and Dominique Davis turned a L into a W two years ago, BC was winless in Winston-Salem. An average of 0.671 seems too high for a road game, but the mode of 0.575 seems like the more accurate statistic here.

Thoughts: I'll continue to caution everyone that will listen not to sleep on Duke. Sure this is a game in mid-November that no one on campus will care about because they will all be lined up to watch a Duke basketball practice or something. But like I said, BC was a terrible road/neutral team that struggled to put away Maryland and Virginia. Duke was a better team than both those programs last year. Cutcliffe has plenty of holes to fill in his third season in Durham, but BC doesn't win this game 85 times out of 100. Then again, if BC has any hopes of winning another Atlantic Division championship, they have to capitalize on drawing both Duke and Virginia from the Coastal this year.

Thoughts: BC has never lost to Virginia (4-0), and first year coach Mike London has a pretty big rebuilding task on his hands. Again, this is a must-win if the Eagles hope to keep pace with the Seminoles and Tigers in the Atlantic Division standings. Might we also be able to catch Virginia looking ahead to yet another beatdown in the Commonwealth Cup the following weekend?

Thoughts: I don't think much of this Syracuse team, but they did beat two bowl teams last year (Rutgers and Northwestern) and return 10 starters on defense. The Eagles have been terrible in the Carrier Dome, and there's bound to be a strange dynamic to this one as BC and 'Cuse renew their old Big East hostilities. I won't even bring up that BC is prone to late season meltdowns against Syracuse ... 0.798 is much too high in my opinion. BC should be favored, but likely in the 0.6 to 0.65 range.