There's a line in The Battle of Comm. Ave that sums up the historical recruiting philosophy of Boston College and Boston University. In talking about his decision to play for BU, Boston University player Jack O'Callahan (1975-1979) said:

When you look at the rosters over the years, you'll see this recruiting trend play out. Boston College hockey has long had the reputation of recruiting predominantly American players, much more so than our Hockey East rivals BU, New Hampshire or Maine. Over the years, you'd be hard-pressed to find more than a handful of BC players from Canada or Europe on the Eagles' roster in any given season. 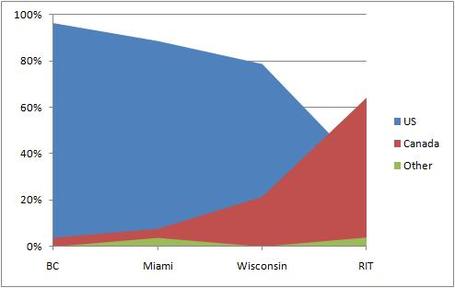 I thought it was interesting to see how U.S. players dominate the rosters of both BC and Miami. In addition, nearly 80 percent of the Wisconsin roster is also from the States. But take a look at RIT. Sixty-four percent of the Tigers roster hails from Canada. Is it any wonder at how quickly RIT has risen through the ranks of Division I hockey with a roster full of Canadian juniors?