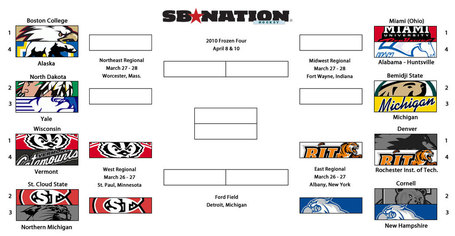 One down, three to go. The Eagles are now a win away from punching their ticket to the 2010 Frozen Four in Detroit.

It certainly wasn't pretty, but BC did just enough this afternoon, outlasting the pesky Alaska Nanooks 3-1 at the DCU Center. Paul Carey tipped in the game winner just 3:46 into the third period. Carey's goal was assisted by Patch Alber and Steven Whitney as Alber led the Eagles on a quick counter-attack.

Boston College opened up the scoring just 8:54 into the opening period, when Matt Lombardi capitalized on a Nanook turnover and scored a short-handed goal. It was his 8th goal of the season (unassisted).

The Eagles added an empty-net goal when with just 11.3 seconds to play, Matt Price was hooked down on the breakaway with an empty Nanook net. Because UAF had emptied their net, the Alaska pulldown gave the Eagles the automatic goal.

John Muse played well in net, stopping 28 of 29 shots faced. On Alaska's one goal, an uncontested tap in from freshman Andy Taranto, Muse really had no shot. The junior goalie did give up some long rebounds that could have cost the Eagles.

The story of this game was special teams. Other than Matt Lombardi's short-handed goal, the Eagles gave up a power play goal and went 0-5 on the man-advantage. When the Eagles were on the power play, they really didn't sustain much of an attack. BC will need to play much better tomorrow if they hope to return to the Frozen Four.

Hat tip to Alaska for giving the Eagles all they could handle today. The future is certainly bright for this program making their first NCAA Tournament appearance. Freshman Andy Taranto is a tremendous talent, and goaltender Scott Greenham played extremely well in the losing effort. Things are certainly looking up for the CCHA's Nanooks.