Share All sharing options for: Getting To Know The Nevada Wolf Pack With Pistol Whipping The WAC

Just who are the 12-1 Ne-VA-da Wolf Pack? To familiarize us Superfans with BC's Kraft Fight Hunger Bowl opponent, Andrew from the Nevada blog Pistol Whipping the WAC was kind enough to give us a little more color on the University of Nevada at Reno, the city of Reno and Wolf Pack football.

I think you'll quickly find that we have more in common than you think (namely: that N.C. State is kinda stupid). Not to mention the fact that "Pistol Whipping the WAC" is perhaps the greatest name for a college sports blog EVAR.

Greetings, Eagle fans, and thanks for the interactions we've shared so far on Nevada's main message board. My name's Andrew, and I contribute to a Wolf Pack blog known as Pistol Whipping the WAC. I love the Pack, but one visit to our blog will tell you that I'm not much for web design. Anyway, Brian was kind enough to respond to an e-mail I sent him just before the bowl invitations were announced, and this will be the first of what we're hoping will be at least a couple of collaborations between PWtW and BCI.

Given the disparities between them in geography, prestige and pretty much everything else, there's obviously not a whole lot of cross-pollination between ACC and WAC teams or their fans. For me personally, the extent of my expertise on Boston is limited to having watched "The Departed" a couple of times, going to an A's/Red Sox game in Oakland last year and being able to do a so-so impression of Mayor Quimby from "The Simpsons." So think of the following as a little primer on Nevada football and the city of Reno.

The first thing you should know about us is that the state's name is pronounced "Ne-VA-da," not "Ne-VAH-da." "A" as in "apple," not as in "father." Anyone who tells you otherwise is full of it and has never been here -- please ignore them (I'm looking at you, Chris Fowler!). It's astounding to think how much time the average Nevadan spends in a year screaming at their TV "It's Ne-VA-da!" whenever someone screws it up, and as sad as it may sound, it's as much a part of our state as legalized gambling.

Truth be told, Lee Corso is only the second-dumbest person in this picture

Which leads me to another misconception to clear up: prostitution. Most of our state's population is in either Las Vegas or Reno, and it's illegal in both places. Only if you drive out to the rural counties will you find actual brothels.

Thirdly, our "Wolf Pack" is two words. N.C. State spells it as one word -- they're kinda stupid like that.

Finally, you must know that UNLV sucks. They always have, and they always will. They insist upon calling our sports teams "UNR" because they feel "Nevada" somehow denigrates them. Ultimately, though, it works out for us, because we just call them "losers." (As an aside, I personally don't have a problem with my alma mater being called "UNR," because that's the full name of the university, but its sports teams are called "Nevada" for the same reason Cal's teams aren't called "UC Berkeley" -- it's about branding.)

As for Reno itself, there's a national perception that the city is a dank, dingy and depressing casino town. And the truth is that a show like "Reno 911!" wouldn't come into existence unless there was a little truth to that perception. But for the most part, we Renoites are fine with that. In fact, when that show was canceled, a few local residents led efforts to bring it back on to the air. Hell, the actor who played Lieutenant Dangle -- Thomas Lennon -- was the honorary grand marshal at the university's homecoming parade during my senior year -- our student body representatives voted to bring him here! Where other people choose to mock our city for its flaws, we just step back and say "Yeah, that is pretty funny." After all, who can you laugh at if you can't laugh at yourself? 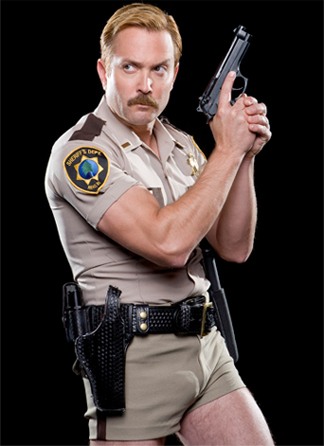 Yes, he was in full costume for the homecoming parade

Now that those are hopefully clarified, let's talk about what we are instead of what we aren't. Nevada is a program that's fairly new to the national spotlight, and is enjoying what is without any doubt the program's greatest season at the D-1 level to date. The last time they were nationally ranked was in 1948, their lone Heisman finalist passed away earlier in the year, and until Thanksgiving they had never beaten a team ranked in the top five.

But what they lack in "traditional" history they've made up for with various quirks that most college football fans may not know. College football's first overtime game? The 1995 Las Vegas Bowl between Nevada and Toledo. Biggest second-half comeback in college football history? A 35-point deficit that Nevada overcame to beat Weber State 55-49 in 1991. The only team in NCAA history to have three different players rush for 1,000 yards each in a single season? Nevada in 2009. The only other active D-1 coach who's currently a member of the College Football Hall of Fame besides Joe Paterno? And the only head coach whose offenses have led the nation in both passing yards (in 1995) and rushing yards (2009)? None other than Nevada coach Chris Ault.

Coach Ault, in particular, now brings me to what Nevada football is probably most renowned for right now: the Pistol offense. It's a hybrid offense where the quarterback lines up four yards behind center with a running back another few yards directly behind him. It combines the passing advantages afforded by a shotgun formation with the downhill running advantages of an I-formation. It's a Nevada original, and it's helped the Pack put up video game-like numbers on offense like the aforementioned three 1,000-yard rushers. It's been adopted in various forms by other college teams from Alabama to UCLA to James Madison and even Boston College. Hundreds of high schools across the country have adopted it as well, and even NFL teams have given it a shot from time to time.

To wrap things up for this entry, I know this isn't the bowl game most of you were hoping the Eagles would play in this year, but believe me when I say the majority of my fellow Pack fans welcome the opportunity to play a program like Boston College. It's far and away the best WAC bowl game Nevada could've been sent to under its current circumstances, and we're all thankful as hell it isn't Northern Illinois in Boise or BYU in Albuquerque. Until our next collaboration, Go Pack and Go Eagles!